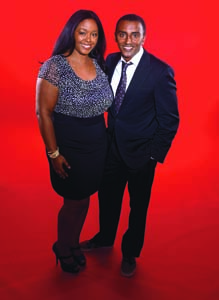 When we first tossed around the idea of doing a food issue, we were in “violent agreement,â€ as our PresidentÂ  and CEO Earl “Butchâ€ Graves Jr. put it. Of course we should do it; everyone loves food. And everyone had a food-related story they wanted to tell.

Multimedia Content Producer/Technology Marcia Wade Talbert, who graduated from the College of Food, Agricultural and Natural Resource Sciences at the University of Minnesota-Twin Cities, wanted to highlight the African American food scientists working behind the scenes at some of the nation’s leading companies, such as Kraft and Campbell’s. Multimedia Editorial Director Sonia Alleyne, who helps us all become savvy about spirits in the pages of Life (this month we share recommendations for holiday entertaining from U’Luvka Vodka brand ambassador Colin Appiah), pitched beverage maestros such as award-winning wine director Brian Duncan of Chicago’s BIN 36. And Copy Editor Robin White Goode, who recently changed her diet after watching the documentary Forks Over Knives, wanted to make sure we addressed the relationship between food and health (for more on our community’s battle with chronic diseases, especially diabetes, see this month’s Power Player interview with UnitedHealth Group’s Executive Vice President and Chief of Medical Affairs Reed Tuckson).

What we decided on in the end, though, was more like a buffet of the varied ways African Americans are finding success working with food. Yes there are some extremely well-known names and faces, such as chef Marcus Samuelsson, whose latest restaurant, Red Rooster, is currently the hottest reservation in New York City, and husband-and-wife team Pat and Gina Neely, who manage to operate a string of barbecue restaurants while hosting the highly rated Food Network show Down Home With The Neelys. But there are also mom-and-pop entrepreneurs driving sales as food truck operators, and hobby bakers turned professional cupcake makers.

We’re also serving up some career paths in the food industry you probably haven’t considered before. The Bureau of Labor Statistics has at least five career guides for food-related industries, ranging from agriculture to grocery stores that employ more than 15 million Americans. “There are so many opportunities outside of just being a chef. There are so many things out there for you to become,â€ says Kevin Mitchell, a chef instructor at the Culinary Institute of Charleston who not only teaches students the ABCs of cuisine but encourages them to explore work outside the kitchen. “You can do really good things. You can make really good money in this industry.â€

Like an overstuffed burrito, there was just too much to cram into this issue. So go to BlackEnterprise.com for Q&As with many of our subjects, their best advice for following in their footsteps, and–for those of you who just enjoy a good meal–their favorite black-owned restaurants across the country. And check out our exclusive interview with the Neelys on the nationally syndicated television show Black Enterprise Business Report. Bon appÃ©tit!

Your Health is Your Wealth