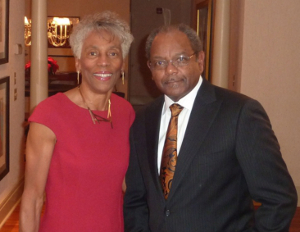 The degrees were bestowed during the University’s Commencement ceremony onÂ May 23, 2013. It is believed to be the first time in its history thatÂ Johns HopkinsÂ has awarded honorary degrees jointly to a couple.

Commenting on the award,Â Eddie BrownÂ said, “Sylvia and I are honored and thrilled to receive this extraordinary recognition from one of the world’s prestigious universities. As a global leader for discovery and learning,Â Johns HopkinsÂ reflects our own passions for educational innovation and outreach to those in need.” Previously, Mr. Brown has received honorary degrees from McDaniel CollegeÂ and fromÂ Morgan State University.

“Eddie and I have been passionate about education for most of our lives,” saidÂ Sylvia Brown. “The awarding of these degrees is a great validation of our work in supporting educational initiatives.”

The honorary degrees fromÂ Johns HopkinsÂ are just the most recent acknowledgement of the Brown’s civic and philanthropic efforts. In 2011, theÂ Maryland Historical SocietyÂ (MdHS) named the Brown’s as the society’s “Marylanders of the Year,” an award whose past recipients have includedÂ Ben Bradlee,Â Tom ClancyÂ and Sargent Shriver. During the awards ceremony,Â Burt Kummerow, MdHS President, said, “Eddie and Sylvia have generated spectacular dividends for impoverished inner-city residents and leveled playing fields across the country in the realms of education, healthcare and art.”