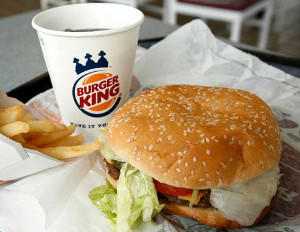 Burger King is currently embroiled in an international scandal involving beef burger patties tainted with meat from horses and pigs.

Silvercrest Foods, a supplier for Burger King’s U.K and Ireland restaurants, reportedly found patties that contained meat “other than beef.” As a precautionary measure, Burger King announced on Thursday that it had dropped the supplier. They stated that this action “may mean that some of our products are temporarily unavailable,â€ but added, “this is not a food safety issue.â€

The fast food giant originally said there’s no evidence to suggest any of the Silvercrest products contained horsemeat contamination, but later issued the following statement apologizing to customers.

“Our independent DNA test results on product taken from restaurants were negative for any equine DNA. However, four samples recently taken from the Silvercrest plant have shown the presence of very small trace levels of equine DNA. Within the last 36 hours, we have established that Silvercrest used a small percentage of beef imported from a non-approved supplier in Poland. They promised to deliver 100% British and Irish beef patties and have not done so. This is a clear violation of our specifications, and we have terminated our relationship with them.”

“[W]e are deeply troubled by the findings of our investigation and apologize to our guests, who trust us to source only the highest quality 100% beef burgers,” Burger King’s vice president for global quality, Diego Beamonte, said in a statement. “Our supplier has failed us and in turn we have failed you.â€

Officials have stressed that the horsemeat-tainted burgers do not pose a health risk to consumers, and Burger King Spokeswoman Kristen Hauser said in an email that Burger King’s U.S. restaurants don’t use meat from Silvercrest.