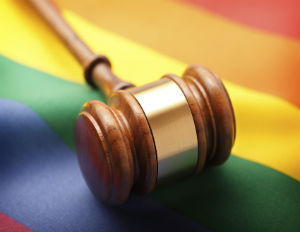 Many big-name companies are taking a stand against North Carolina Gov. Pat McCrory’s decision to sign a new anti-LGBT law.

Under the new law, which was signed last Wednesday, cities are prevented from passing antidiscrimination laws that protect lesbian, gay, bisexual, or transgender people. The law was drawn in response to a recently passed ordinance in Charlotte, which allows transgender people to use the bathroom that aligns with the gender with whichÂ they identify. Conservatives, including McCrory, have agreed to take down that bill, arguing that the law gives predators the right to enter women’s bathrooms.

In response, many companies are taking a stand and speaking out against the issue. Companies like IBM, PayPal, Apple, Facebook, Google, and Salesforce all released statements via Twitter announcing their disappointment in the state andÂ its no-tolerance policy for discrimination.

The NBA, which is set to hostÂ its 2017 All-Star game in Charlotte, has spoken out against the law and released the following statement via Twitter.

Both the NCAA and the Central Intercollegiate Athletic Association (CIAA), which is the oldest African American sports conference, have also spoken out against North Carolina’s new bill, as Charlotte is the host city for many of their upcoming sporting events.

American Airlines, whose second largest hub is in Charlotte, said, “Laws that allow such discrimination go against our fundamental belief of equality and are bad for the economies of the states in which they are enacted.” Meanwhile, Lowe’s released a statement saying it “opposes any measure in any state that would encourage or allow discrimination.” Dow Chemical, which has several factories in the state, and Biogen, a biotech company that has more than 1,000 employees within the state, also tweeted their opposition to the bill and their support of equal rights.