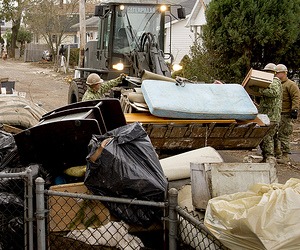 Congress passed only a fraction of the Hurricane Sandy relief bill Friday, which means that most businesses devastated by the storm are still waiting for help. Both chambers of Congress approved $9 billion in funds to cover flood insurance needs. But the majority of the relief — another $51 billion that includes help for small businesses — won’t be addressed until Jan. 15.

An estimated 19,000 small businesses in New Jersey sustained damages of $250,000 or more, according to Gov. Chris Christie. In New York, businesses across the state will suffer up to $25 billion in economic damages.

The second part of the $60 billion proposal includes $800 million for the Small Business Administration, which is handling all government aid to private companies. Most of that is in the form of low-interest, 30-year SBA disaster loans of up to $2 million. The SBA does not have enough money to cover the expected demand created when the Superstorm devasted the Eastern seaboard.

More than 200,000 businesses were impacted by the storm, and already 4,212 have applied for SBA disaster loans, according to agency figures. Of those, only 246 applications have been approved, amounting to $27 million for businesses.

Temp Workers More at Risk of Injury on the Job, New Research Shows