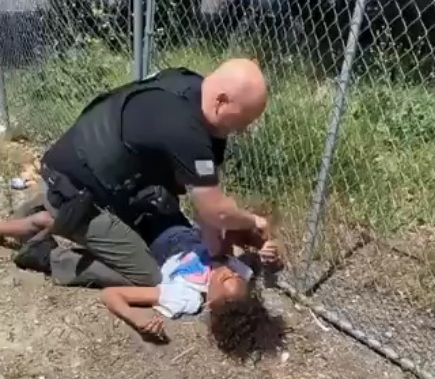 Police brutality against unarmed blacks is a trend that never seems to end, even with video proof surfacing. The latest proof of this illegal and immoral act took place in California, according to Fox 40.

Fourteen-year-old Elijah Tufono, endured a vicious beating from a police officer in Rancho Cordova, California. A video clip of the beating was posted Monday on Twitter by a witness. The teenager, who was unarmed at the time, was being beaten by a police officer with the Rancho Cordova Police Department (RCPD) over a cigar. The officer sat on top of the boy, punched him and maneuvered his arm in such a painful motion that it looked as if the limb might break. (The video footage, captured in the below tweet, is difficult to watch.)

RCPD brutally tackled and hit my best friend’s 14 year old brother today over a swisher sweet! The officer had no reason to brutalize and traumatize this boy like this! He has a pre existing health condition which could be fatal under this kind of stress! Unjustifiable! pic.twitter.com/94fqyu3J28

“On April 27, 2020, a Problem Oriented Policing (POP) Officer with the Rancho Cordova Police Department was proactively patrolling the area of Mills Station Road and Mather Field Road. The deputy was in the area due to complaints from citizens about hand-to-hand sales of alcohol, tobacco and drugs to minors.

“It’s important to put video footage into context, especially in relation to a use of force incident. In this case, the deputy saw what he believed to be a hand-to-hand exchange between an adult and juvenile. As the deputy turned around, he lost sight of the adult, who left the area. When the deputy approached the juvenile, the juvenile was uncooperative and refused to give the deputy basic identifying information. He told the deputy he was 18 years old. Having reasonable suspicion that criminal activity was occurring, the deputy attempted to detain the juvenile so he could conduct further investigation. The juvenile became physically resistive at that time, causing the deputy to lose control of his handcuffs, which landed several feet away. The deputy attempted to maintain control of the juvenile without his handcuffs and while alone waiting for his partners to arrive and assist him.

“Ultimately, the deputy recovered tobacco products from the 14-year-old juvenile, which is presumably the reason for his resistance. The juvenile was cited and released to his guardians.

“This type of situation is hard on everyone—the young man, who resisted arrest, and the officer, who would much rather have him cooperate. The community should know our deputies have a heart for the Rancho Cordova community, especially for the youth they serve through the schools, PAL sports, and our new Youth Center.