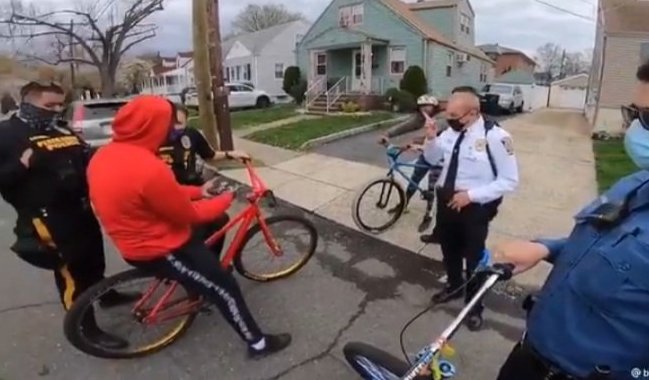 Police officers in Central New Jersey were caught harassing a group of Black and Latino teens riding their bikes on the wrong side.

On Tuesday, the 17-minute video features officers confiscating the boys’ bikes on grounds of being “unlicensed” and taking one of them away in handcuffs, theGrio reported.

Related stories: COP SHOT, ARMED BLACK STUDENT KILLED, BUT WAS NOT RESPONSIBLE FOR THE SHOOTING

According to NJ Advance Media, a group of about a dozen teenagers was popping wheelies against heavy traffic. The video shows four bikes being taken away.

The video has gone viral on YouTube and Twitter, especially during the heightened awareness of police brutality in the wake of the Derek Chauvin murder trial.

“You guys are supposed to have licenses and all that kind of stuff,” one of the police officers said. “Guys, we don’t make the rules. You guys know when there’s 30 or 40 of you together, it creates a problem for people driving.”

By Perth Amboy municipal ordinance, it is required to have license tags on one’s bike, an owner can retrieve their confiscated bikes once “payment of any fine imposed or upon any final adjudication” has been paid.

All of the bikes were seized, but one Black teen refused to let go of his bike – he appeared to be arrested, but it has not been determined if he was charged with a crime.

“I think the first officer who eventually got a very small handful of all of them to stop, I think, handled himself very well and diffused the situation. I think the second officer that came on scene had asked some of the group, and they ignored her and they just kept going,” Perth Amboy Council President William A. Petrick said. “And so she was coming into the different emotional level. But I think that she did the right thing, and that she confiscated the bikes and brought them back to the police station, and the minor, young adult, that she took into protective custody because I did not see an arrest.”