Storedot Battery Can Charge Your Smartphone in 30 Seconds or Less 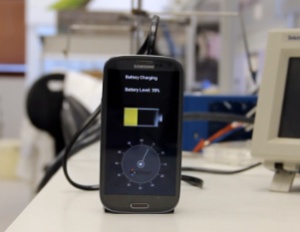 Charging a dead smartphone can be a multi-hour affair, and with batteries getting bigger, it only takes longer to top off your device.

It uses the company’s proprietary “nanodot” technology, which, according to the company, is the “first bio-organic nano crystal ever discovered.” The nanodots are two nanometers large, and made of bio-organic peptide molecules.

The nanodots have a future in almost every aspect of technology, from increasing image sensor sensitivity to serving as biomarkers in medicine.

But the company is showing off something more consumer-grade: incredibly fast smartphone battery charging.

RELATED: Need to Charge Your Phone? Go for a Walk

In a video posted by StoreDot founder and CEO Doron Myersdorf, the prototype battery back is attached to a smartphone and fully charged in less than one minute. When speaking to Techcrunch, Myersdorf admitted the technology wasn’t ready for any sort of consumer product yet.

“We are about one year from a functional prototype that will be inside the device,â€ Doron said. “Right now we show a battery that extends beyond the form factor of the smartphone. So in one year we’ll have reached the size, and in two years we’ll reach the required energy density for the entire day.”

Myersdorf wants to eventually open a manufacturing facility for StoreDot’s battery technology in order to reach the consumer market more quickly. Right now, the company has just $6.25 million in funding, but is hoping to raise at least $20 million in its next funding round.

You can check out the incredible charging technology in the video below.