Charles Dutton Talks About His New Film, 'The Obama Effect' 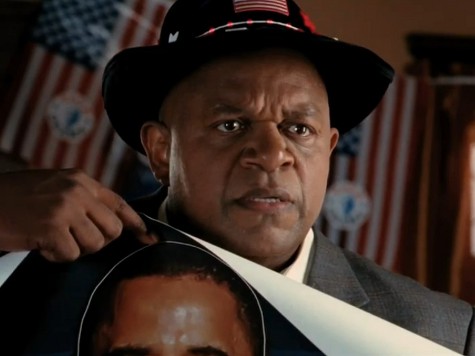 Charles Dutton in character on the set of 'The Obama Effect.'

It could be the title or maybe it’s the timing (or a combination of both) that has actorÂ Charles S. Dutton fielding hard-hitting questions and refuting accusations about his new film The Obama Effect. Some right-wing republican blogs have accused his small, independent movie of being a Hollywood-financed project. While others question if the dramedy about a man obsessed with getting President Obama elected into office is really a propaganda film.

“I would hope that they would think before they talk,â€ says the Emmy Award winning director and actor of his skeptics. “If this was a Hollywood financed movie, do they think for a second that we would only be releasing in eight cities? Nor did we go to the Obama cabinet or the Obama super PAC to get money to do the film. There wasn’t a nickel of Hollywood money or Obama money used to produce the film. I didn’t want to be dictated to by a Hollywood studio or the Obama campaign about how I should create and direct a picture about the first black President of The United States.â€

However, Dutton, who made the film on a shoestring budget over the course of the president’s first two years in office, is unabashed about the movie’s pro-Obama stance. He was inspired by the hype and fervor that permeated the 2008 presidential election, and wanted to be the first to capture the historical event on film.

“When [Obama] won, there was so much polarization and division and emotion and passion and euphoria. I got excited about wanting to do something that depicted that moment in time. I’m a child of the 60s. I know the passion of the decade, and the Obama phenomenon reminded me of that,â€ says the 61-year-old Baltimore native. “That kind of fever comes along once in a lifetime. The last time Americans experienced that was in 1961 with John F. Kennedy.â€

In the film, Dutton plays an insurance salesman, who suddenly takes an overwhelming interest in the 2008 Obama presidential campaign after a serious health scare changes his view on life. He becomes so engulfed; he neglects his wife, children and job–and learns a few life lessons along the way. The plot sounds somber, but don’t be fooled. The last thing Dutton wanted to do was make a staid political movie.

“I didn’t want to write King Lear,â€ jokes Dutton, who wore triple hats as the film’s star, writer and director–a creative experience he likens to washing a battleship with a Q-tip. “I didn’t want to make it a serious film because I never viewed the election as a heavy situation. I wanted to have fun with it.â€

Unhappy with the first cut of the film because the ending came off too bleak, Dutton made the audacious decision to lighten up the vibe by casting Katt Williams as a staunch, well-to-do Republican, who’s struggling with his political ideals.

“We brought Katt in and he does a terrific job in the movie,â€ says Dutton. “He’s not just doing a standup routine. He’s really doing a character.â€

Rounding out the cast is Vanessa Bell Calloway, Meagan Good, Glynn Turman and boxer Zab Judah in his acting debut. As the next election looms, Dutton hopes that the film will remind people that there’s still a lot of work left to do.

“The fight isn’t over,â€ he says. “If they thought 2008 was about history, well 2012 is about survival. You need to get out there and do the same thing you did the first time around.â€

But even if it doesn’t drive people to the polls, Dutton takes pride in knowing that his film has set the bar for the slew of other Obama-themed productions bound to come.

“We have people coming out of theatre in tears, remembering where they were the night it was announced that we had our first African-American president,â€ he says. “We captured that in the film. So, I guess I’m tied to cinematic history with the first black president, and in that regard I’m very excited and very proud.â€

The Obama Effect is playing in select cities now.