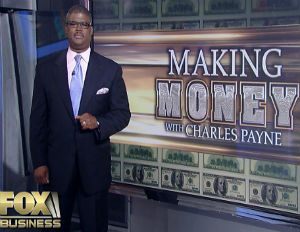 On Monday, June 2, 6 p.m. (EST), the Fox Business Network will launch a new show that adds a little more color to the network’s weekday prime-time lineup.

He becomes the first African American lead anchor with a prime-time show on the Fox Business Network.

According to Fox, his program will explore investment avenues based on the day’s top stories.

Payne had already forged a reputation within the network doing regular hits and segments about investment sectors and investment avenues in the market based on the news of the day.

His segment “Making Money with Charles Payne” started building a lot of positive feedback and soon became so popular, the network spun it off into its own show.

It’s been a long journey. Payne has more than 30 years experience as a broker and analyst. He believes the American dream has been lost and says he wants to help viewers out there realize their financial goals. He says the greater overarching message of the show is self-improvement and self empowerment toward a better life down the road.

He adds, “You know the top 100 metropolitan areas in the country, it’s much cheaper to own than to rent but people choose to rent. They don’t wanna be bothered. Kids aren’t getting married, we’re not having babies and we’re were not starting businesses.”

Payne also says, “My main goal is to break through this malaise – remind people to re-embrace the American dream because it’s not dead — this is the greatest economy ever created. The greatest country ever created and we are in a rough patch. I don’t like the idea of tossing in the towel and too many people have done it.”

Payne says with his show as a platform, he wants to rekindle that lost spirit of entrepreneurship.

He tells BE, “I am a big believer in an ownership society so if you can’t go out tomorrow and start a Starbucks or something — how about you just take a piece out of one that already exists — especially if you go there everyday.”

On the show, he will be joined daily by a panel of business experts who discuss the news of the day with a focus on how to read the news of the day in order to profit from it and to utilize it to make smart investment choices for tomorrow. They will also take a look at tomorrow’s money makers. Another segment shines a spotlight on America’s heroes in business and talks about business success stories.

Part of the show’s focus will also center around retirement investing.

“Everyone knows instinctively that what they have saved now is not going to be enough money to get them where they want to go. So where do they turn to? For the most part, when you turn on financial TV it’s about the recession — better trading — or watch out the crash is tomorrow. We need to look beyond that. To understand that crashes will happen – that the economy is cyclical, but through all of it we are on an all-time high right now.”

He also discusses the trust issues between “Main Street” and Wall Street.

“What I do for a living is I look under the hood. I try to see what’s really going on. People don’t trust Wall Street and I don’t blame them. Wall Street has a well-earned reputation but don’t confuse Â Wall Street, that physical place in lower Manhattan where these guys come in on helicopters then fly out to the Hamptons over the weekend with owning a great piece of an American company. Don’t confuse the two.”

He says he’s still amazed at the voice and opportunity he now has,”I’m really thrilled and grateful and I just want to make this thing a big hit.”

Payne will have competition from CNBC and Bloomberg TV.

According to Foxbusiness.com, “Payne joined FBN as a contributor in 2007 and frequently appears across the network and FOX News Channel. He began his career on Wall Street as an analyst in 1985. In 1991, he founded Wall Street Strategies, an independent stock market research firm where he serves as chief executive officer and principal analyst.”

His first book entitled Be Smart, Act Fast, Get Rich was published in 2007.