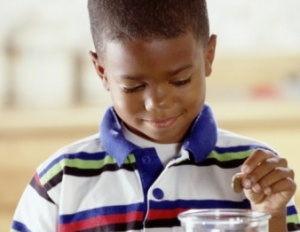 Charter schools suspend students of color and students with disabilities at higher rates than their peers, a new analysis finds. That trend mirrors disparate discipline rates in traditional public schools, although the report finds suspension rates at charters to be slightly higher on the whole.

TheÂ first-of-its-kind analysis of charter school discipline data, completed by the Center for Civil Rights Remedies at the University of California Los Angeles, adds new insightÂ to a debate that has accelerated in recent years as traditional public schools face more scrutiny for how often they remove students from the classroom and whether their suspension policies are applied fairly across racial, ethnic, and other demographic groups such as students with disabilities.

Civil rights advocates have said charter schools have often been left out of those discussions and that some charters rely too heavily on zero-tolerance discipline policies that lead to higher suspension rates.

Analyzing the most recent federal data, which was collected by the U.S. Department of Education’s Office for Civil Rights during the 2011—12 school year, the authors found suspension rates at about 5,000 charter schoolsÂ to be slightly higher than those at traditional public schools in most categories. On the whole, charter schools suspended about 7.8% of students that year at least once, compared to 6.7% of students at traditional public schools.

Here’s a comparison of those rates at the secondary level. SWD is an abbreviation for students with disabilities, EL stands for English language learners, H/PI stands for Hawaiian/Pacific Islander, and AME stands for American Indian.Â The analysis excluded alternative schools, schools that are part of the juvenile justice system, and virtual and online schools. 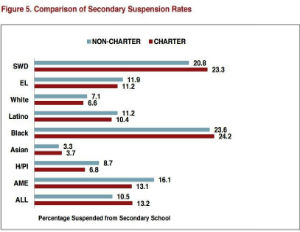 “More than 500 charter schools had a black-white suspension gap of more than 10 [percentage] points,â€ the report says.