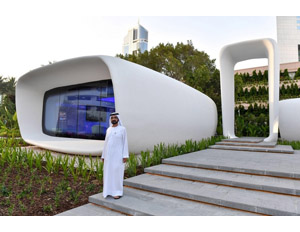 The first office building to ever be created from 3D printers just opened in Dubai.

According to Reuters, the effort is, “part of a drive by the Gulf’s main tourism and business hub to develop technology that cuts costs and saves time.â€

“This is the first 3D-printed building in the world, and it’s not just a building, it has fully functional offices and staff,” the United Arab Emirates Minister of Cabinet Affairs, Mohammed Al Gergawi, said in a statement to Reuters.

The printers used are designed to make three-dimensional plastic objects. Using 3D printers to erect buildings may reduce construction time by 50-70% and reduce costs by 50-80%.

3D printing is changing many facets of traditional manufacturing and even healthcare. Recently, Robo 3D, a 3D printing company that specializes in printing prosthetics (artificial body replacements parts) held a “Printing with a Purposeâ€ marathon.

The company printed 35 prosthetics and then donated them to the Enable Community Foundation, a global network of volunteers who issue the prosthetics to those physically challenged.

In February of 2012, an 83-year-old British woman became the first person to receive a 3D-printed jawbone transplant. (http://www.blackenterprise.com/technology/3d-printing-history-6-moments/).

A few years ago, the first 3D-printed car, the Urbee, hit the road. It uses eight times less power than the average vehicle.

3D printers are also expected to very soon allow everyday users to replace parts to commonplace items, such as the back of a remote control, or a shower curtain rod, or any number of other household items.