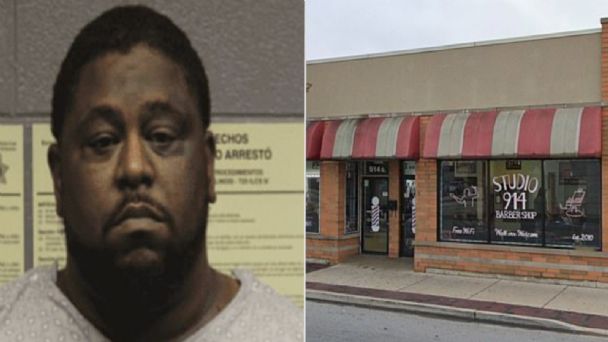 The owner of a Chicago barbershop is being held on bail after he allegedly shot and killed a customer who refused to pay.

Forty-year-old Deshon Mcadory is charged with first-degree murder after fatally shooting one of his customers at the Studio 914 barbershop in Maywood last Thursday, the Chicago Sun-Times reports. Thirty-year-old Christian McDougald lost his life after he refused to pay for his haircut, Assistant State’s Attorney Kevin Meehan said.

McDougald’s dispute moved outside with everyone leaving except for Mcadory. He shot McDougald once in the chest after he followed the shop owner to the back door, Meehan said. McDougald’s body was discovered by responding officers and taken to Loyola University Medical Center where he was pronounced dead.

Surveillance footage from the scene identified Mcadory as the shooter with the gun associated with the shooting being found in a coat believed to be the shop owners. His arrest led to his business partner, 43-year-old Samuel Williams, also being arrested after cops found three other guns at a workstation belonging to Williams.

With Williams having a criminal history that includes four previous felonies, he was charged with unlawful use of a weapon by a felon. He appeared in court on Sunday alongside Mcadory and was given bail set at $25,000, NBC Chicago reports.

Mcadory’s attorney, Anthony Burch, claims his client was acting in self-defense and noted his Firearm Owners Identification card and a concealed carry permit. Burch says Mcadory was “retreating” back into the barbershop when McDougald approached him as the “aggressor.”

Burch described Mcadory as a lifelong Cook County resident who works hard and provides jobs to the community. He employs eight contractors and supports his two sons who are still in college. Judge David Navarro set his bail at $250,000. He is expected in court again Wednesday along with Williams.