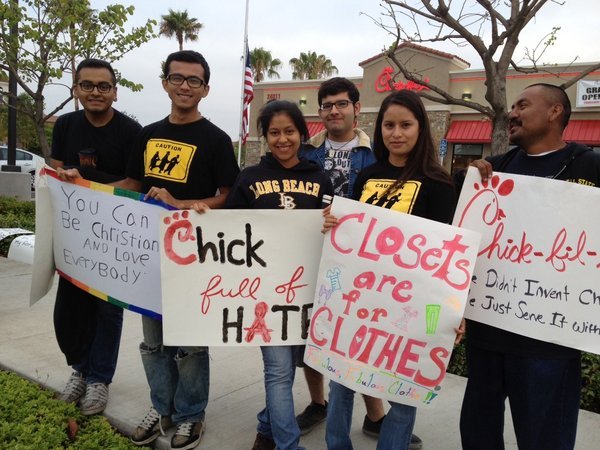 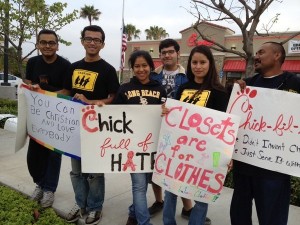 This recent Chick-fil-A controversy has my head spinning. Chick-fil-A has been characterized by some as the latest victim of goodwill that must continue to stand strong against “homosexuals’ attempt to demonize this Christian based company.â€ Chick-fil-A is a fast food restaurant chain headquartered outside of Atlanta with over 1,600 restaurants in 39 states and the District of Columbia with revenues in excess of $4 billion. Chick-fil-A and the non-profit foundation WinShape it supports have donated more than $2 million dollars to anti-LGBT organizations, including Exodus International, the National Christian Foundation, the Family Research Council, and the Marriage and Family Foundation, all of which support a constitutional amendment banning gay marriage.

On last Wednesday, hundreds of thousands of traditional marriage activists ate “mor chickin” to support Chick-Fil-A Appreciation Day. On Friday, same-sex marriage allies turned out to stage a spin on traditional sit-ins, organizing “kiss-ins” outside of Chick-Fil-A restaurants from Dallas to New York City to celebrate National Same-Sex Kiss Day. The spark forÂ last week’s protests both for and against Chick-Fil-A stemmed from comments the company’s President and COO Dan Cathy made about supporting traditional marriage.

What is most disconcerting for me about the Chick-Fil-A protests is that once again the fight for gay rights, including the right to marry, has been marginalized in the media as a battle between a pro-gay marriage contingent (or anti-Christian Sinners) and an anti-gay marriage contingent (or Christians with values). The term Christian values historically refers to the values derived from the teachings of Jesus Christ. One thing we know for sure from the Bible is that Jesus disliked hypocrites, especially the Pharisees–party representing the religious views, practices, and school of thought among Jewish people.

Cathy and Chick-fil-A supporters have a right to their opinions and beliefs about marriage. I support Free Speech. I also support the right not to patronize this establishment for its stance on LGBT rights. Anti-gay pundits accuse gay activists of trying to “force acceptance of homosexual lifestyle choices and for attacking those who disagree with their views.â€ But isn’t that exactly what anti-gay rights and anti-same-sex marriage champions have done and continue to do.

Cathy didn’t just support the ideal of marriage as “one man and one woman,â€ he went as far as to state that marriage equality is “inviting God’s judgment;” and that our pro-LGBT culture his a “deprived mind.” It is in light of this statement that LGBT groups and allies have taken action against the company.

Sexual abstinence outside of marriage is a Christian value. But I don’t think there would have been as many chicken eaters on a “No Fornication Appreciation Dayâ€ at Chick-fil-A. I can only imagine how many lines around the corner there would have been if Cathy had given an interview where he stated we are inviting God’s judgment on our nation for premarital sex and procreation outside of wedlock. And what if he discriminated in employment at Chick-fil-A–”deprive minded unwed mothers need not applyâ€–and donated millions of dollars to causes that attacked illegitimate children. After all, Deuteronomy 23:2 states, “No illegitimate children can belong to the LORD’s assembly. Not even the tenth generation of such children can belong to the LORD’s assembly.â€ And why is it the laws of Leviticus apply only to LGBT persons (many shall not lay with another man)Â given what else the Bible forbids and finds as abominable including eating shellfish (Leviticus 11: 10), eating pork (Leviticus 11:7-8), gossiping (Leviticus 19:16), consulting psychics (Leviticus 19:31), having tattoos (Leviticus 19:28), and mistreating foreigners (Leviticus 19:33). I guess none of these falls under the realm of Christian Values.

Myself being a Christian (baptized at age 10, went toÂ mass, attended Catholic schools both junior high and high school, and engaged in plenty of Bible studies), I can assuredly say that the Christian values I learned were love (love God with all your heart, mind and soul and love they neighbor as thyself), renunciation of violence (if someone slaps you on the right cheek, turn to him the other cheek), forgiveness (if you forgive men when they sin against you, your heavenly Father will also forgive you), and harmony (love your enemies and pray for those who persecute you).

Yet, in the 21st century “Christian values” and “family valuesâ€ have been twisted to describe political stances such as supporting laws against abortion, laws against same-sex marriage, discrimination of LGBT workers and parents, abstinence-only education, and organized prayer in public schools.

I am not looking to force anyone to change his or her mind on same-sex marriage or to get conservative Christians to join hands with me and sing “Kumbaya, my Lord.â€ I think that we need to stick to the heart of the matter and that is this is a legal fight. The real battle is in the courts. LGBT rights are not about religious principles and LGBT rights are not about special privileges. Defending LGBT rights is about ensuring that every single citizen of the United States of America is granted his or her Constitutional rights and civil liberties.