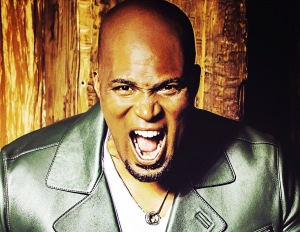 Comedian, actor, writer and producer Chris Spencer is no stranger to working behind the scenes and in front of the Hollywood cameras. In addition to being a star in several popular films and television shows such as Two Can Play that Game, The Jamie Foxx Show and more recently Being Mary Jane, Spencer is also co-creator of the hit BET show Real Husbands of Hollywood.

With a resume in the industry that keeps growing and his new film I Really Hate My Ex, directed and written by Troy Byer, available now on DVD, Spencer talked to BlackEnterprise.com about his latest projects, career transitions in Hollywood and advice he would give young comedians who are looking to break into the industry.

BlackEnterprise.com: What can viewers expect from your new film I Really Hate My Ex?

Spencer: They can expect humor and they expect to see another angle of the male and female relationship. I think a lot of women will connect to the lead character because there are many times where you get so mad that you just want to do something very drastic. In this case, she goes as far as to kidnap someone.

What drew you to the script in the film?

I think my sensibility. I like to be funny, but I also like to hit you in the rib, poke you in the back of your neck and make you think. I think Troy Byer did an excellent job when she wrote this [film] and I was like, “Oh yes, I definitely want to be a part of this.â€

Are there certain qualities that you look for in a character before saying yes to the role?

You’re also the co-creator of the show Real Husbands of Hollywood. Why do you think this show was such a huge hit from the start?

We expected that by having one of the hottest comedians in the country, Kevin Hart, so that’s number one. Number two, Stephen Hill and Jesse Collins allowed us to basically do whatever we wanted to do when we created the original sketch at the 2012 BET Awards and that went viral. People were creating Facebook accounts, Twitter accounts and petitions saying please get this on the air. So by the time we came around and did the sketch again with Samuel Jackson, there was no denying that we needed to do a television show.

As someone who’s worked in Hollywood as a comedian, actor, writer and producer, what do you think has been the key to you successfully making these transitions without being boxed in?

My ability to listen. I have protÃ©gÃ©s and role models and people who I can call on to ask questions. We have a great community in the comedic world and black actors world and we share information with each other. If something don’t seem right or feel right, then I have people I can call on whether it be Chris Rock or Tisha Campbell or Will Smith.

What’s been the best piece of career advice that you’ve received and who did it come from?

Damon Wayans. He told me, “Do not wait for an audition. Go out and create your own vehicle.”

What advice do you have for the young comedians today who are looking to break into the industry?

There’s a false sense of funny when you do all these videos. A lot of them do all these videos and then they get booked for shows across the country and they can’t do 15 minutes of time. People are going to be excited to see them from the video, but when that 15-minute mark hits, that’s when it starts to get hot. So my advice to these guys is not all money is good money and you can’t fizzle out at these shows because you’re not able to do the time. Make sure you’re doing your due diligence and homework by actually going into the club, writing and creating and let these people know when they book you that you only have a certain amount of time of material.

Be sure to pick up a copy of Spencer’s latest film I Really Hate My Ex on DVD today.