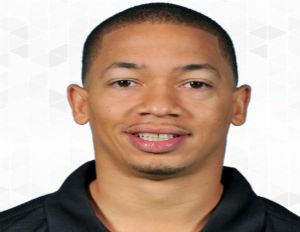 When one thinks about Tyronn Lue, an image that immediately comes to mind is NBA superstar Allen Iverson stepping over him as he buried a three-pointer during the 2001 NBA Finals.

But after retiring as a pro-basketball player, after 11 seasons on seven teams, Lue has been forging a resume in gold as an NBA assistant coach.

He was named director of basketball development in Boston with the Celtics in 2009, and last year he joined the Los Angeles Clippers‘ coaching staff, working under Doc Rivers.

He recently accepted a position in Cleveland that according to Yahoo Sports now makes him the highest-paid assistant coach in NBA history —and in all of professional sports.

After his big payday, The Cavs put out this statement, “Over the past several weeks, it became clear that Ty could play a key role in our team’s future success. Ty fits our culture and vision for the franchise. His successful experience as both a player and coach is going to help us tremendously. The leadership and knowledge of Ty is going to be critically important as we move into a new era of competitive Cavaliers basketball.”

It’s easy to see why the story of Lue’s success isn’t making a splash. It’s easy to get lost in the narrative of LeBron James‘s triumphant homecoming, the recent signing of Kevin Love, and even Cavaliers head coach David Blatt coming to Cleveland after conquering Europe.

But Lue will be an important part in helping Blatt transition from his “decorated coaching career in Europe to the NBA.”

According to Yahoo Sports, “Lue agreed to a four-year, $6.5 million deal. The contract’s final two years will pay Lue $1.75 million and $2 million, league sources said. The fourth year of the deal is a team option.”

Yahoo’s Adrian Wojnarowki says, “Cavaliers management grew fond of Lue during the interview process for the head-coaching job that ultimately went to Blatt and immediately pursued him for the associate head-coaching job. Rivers didn’t want to lose Lue from his Clippers staff, but the Cavaliers’ historic financial commitment made it impossible to turn down.”

Is he worth it?

Bleacher reports, “Putting Lue’s payday into further perspective, the top-earning assistant coach during the 2012-13 season, Mike Malone–who took over as head coach of the Sacramento Kings prior to this season–earned $750,000.”

That’s half of what Lue will be making.

But in Lue, Blatt gets an assistant whose knowledge of the NBA style of play will help accelerate the new head coach’s learning process.

The Cavs clearly think Lue’s worth the price. Whether they got a bargain remains to be seen. And if for some reason things don’t work out with Blatt, in Lue the Cavs already have a coach waiting to take over.