A Coworking Space Grows in Detroit 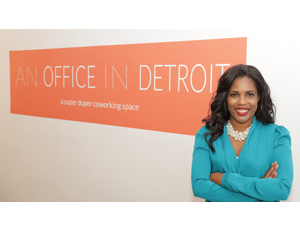 Katrina Turnbow is reflective when she speaks about her newest co-working space.

“The cool thing about that–it’s the neighborhood whereÂ I grew up. The significance is that the ‘67 riots actually happened on the corner of the shopping complex where I will be.

[It’s] pretty significant to bring something to a neighborhood that was devastated. We will provide co-working space and opportunity outside of downtown Detroit; once you get outside midtown and downtown [and] get to regular Detroit–people are afraid. [But] there are plans, which have not been a highlight…â€

A Rarity: A Black-Owned Co-working Space

Turnbow is one of perhaps a handful of African Americans who have opened up co-working spaces. These are communal office spaces that are attractive to startups because they are affordable and provide all of the amenities of an office without the high costs of renting commercial space.

Turnbow acquired her first co-working space, An Office in Detroit, in February.

“The guy who owned it before was kind of grassroots; there was mismatched furniture,â€ she says. “I felt it had the right kind of people. I am changing and adding some things, but the people I have been meeting are true business owners trying to get their businesses off the ground or are established and don’t want to be in a coffee shop.â€

Out of the Mainstream Startups, Welcomed

She is particularly focused on luring African American-owned startups or any fledging company or entrepreneur that may feel out of the mainstream.

“Detroit can be very cliquish and segmented. If you are not young and hip andÂ just a regular business and don’t come from that world, I’ve heard people say it’s intimidating. OrÂ if you are not super young… I’m a mother with two kids,â€ Turnbow says.

“It’s more of a true community and not based upon everyone. It’s OK if everyone is not super successful right now–that is one of the things–it’s real organic.â€

She is set to open her second location in downtown Detroit this month. This co-working space will also double as a digital marketing studio, as Turnbow’s background is in marketing.