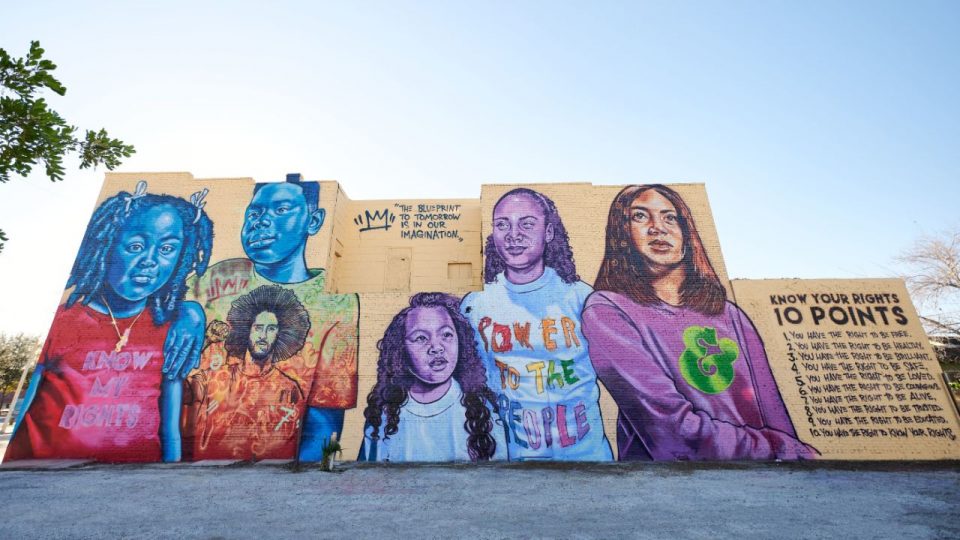 Now, Ben & Jerry’s has taken the recognition of Kaepernick’s work one step further. In an announcement, the ice cream company revealed that a new mural honoring Kaepernick’s courageous fight against police violence and systemic racism was unveiled in Old West Tampa.

“As we look back, it’s clear that Colin was on the right side of history,” said Chris Miller, Ben & Jerry’s head of Global Activism, in a written statement. “His pre-game protests were before George Floyd’s murder; before the 2020 summer of racial reckoning. He knew a long time ago that we need to address the root causes of racism and the structures of our society that are so brutal to Black people. We wanted to be part of the effort to honor Colin’s courage and legacy because we share the same values.”

The 30′ x 90′ mural is located on Moses White Blvd. and features portraits of Tampa youth alongside Know Your Rights Camp (KYRC) volunteers. The mural was conceptualized and done in a collaborative effort with artist-activist Brandan “BMike” Odums, Know Your Rights Camp (KYRC), and Ben & Jerry’s. The mural was funded by Ben & Jerry’s as part of its Change the Whirled collaboration with Kaepernick and KYRC.

The mural unveiled this week was created by Odums, who is an activist, educator, and street artist and just happens to also be a friend of Kaepernick and the designer of the Change the Whirled pint. His work celebrates Black history and strengthens the movement for racial justice and equity.

“The blueprint to tomorrow is in our imagination,” Odums said. “I think, ultimately, it’s the idea of allowing people, especially young people, the agency to understand that the way things are isn’t the way they’re supposed to be.”