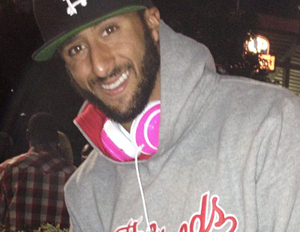 On Oct. 9, Colin Kaepernick of the San Fransisco 49ers was fined $10,000 from the NFL, for sporting bright pink Beats by Dre headphones in support of Breast Cancer Awareness Month during a post-game news conference. The NFL reinforces a strict no-competition policy, which prohibits athletes from wearing gear that advertises products other than the designated sponsor—whether on the field or off—during official interviews.

Prior to the incident, the league had signed an exclusive deal with Bose, permitting players only to wear Bose headphones. Keeping the deal in mind, players wouldn’t be able to promote Bose’s target competitors, such as Beats by Dre, publicly during official interviews or on the field.

The 26-year-old quarterback has a current endorsement deal with Beats. A spokesperson for Beats said athletes “have written Beats into their DNA as part of the pre-game ritual. Music can have a significant positive effect on an athlete’s focus and mental preparedness, and has become as important to performance as any other piece of equipment.”

Kaepernick posted an Instagram phooto of ESPN’s story on the fine on Thursday, writing, “I support breast cancer awareness! My grandma is a survivor!……. *shrugs* some things are now important! #IDontGetTired #WhoDoYouLove #Se7enPounds”. In response to being asked by reporters whether or not he individually paid the fine, he insisted, “We’ll let that be unanswered.” This isn’t the first case where an NFL player has been fined for affiliating with non-NFL products. Back in 2007, Brian Urlacher was fined $100,000 for wearing a Vitamin Water hat during a Super Bowl media day.