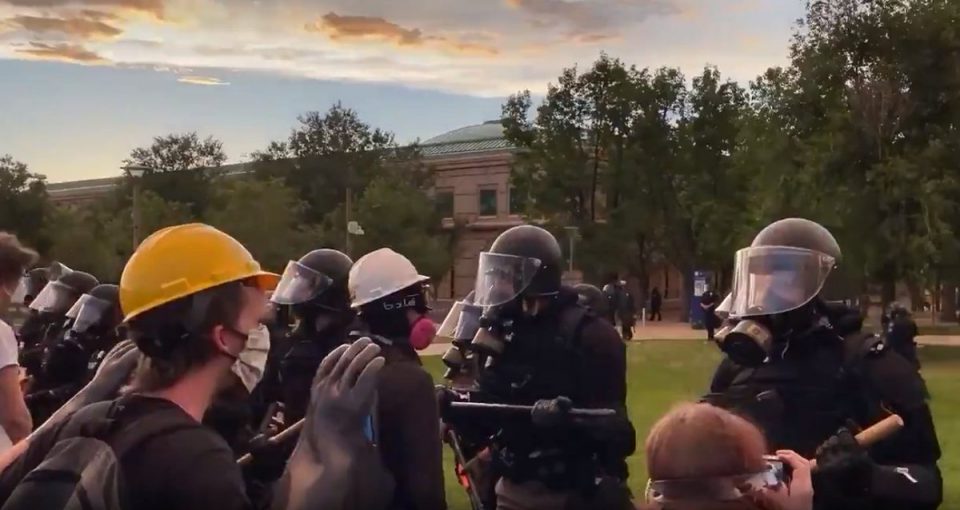 A peaceful violin vigil for Elijah McClain, who was killed last year, was broken up by riot police who shot pepper spray at the crowd.

According to BET, McClain, a violinist, was being remembered by a group of fellow violinists at Aurora’s Municipal Center. As the vigil continued, officers from the Aurora Police Department showed up and began telling attendees to disperse. That’s when things changed.

The vigil “was a peaceful protest, with people carrying violins and cellos, playing in honor of Elijah McClain,” Joy Adams, a cellist who came from Boulder to participate, told Violinist.com. “There were children in the crowd, musicians playing, people holding candles and roses and sitting on the ground…We were playing Pachelbel’s Canon, and the police went nuts—beating people with batons and spraying tear gas in their faces.”

Arts Journalist John Moore also described the scene saying the actions of the police led to the issue.

“Thankfully, the police never went after the musicians themselves, but they incited unnecessary aggression and heightened tension (but no violence) from a crowd that wasn’t there to make noise,” Moore wrote. “They were there to listen to music. But once provoked, the music became the soundtrack to an ugly conflict between art and authority,” Moore wrote on his Facebook page.

The Aurora Police Department said on Twitter its aggressive actions were in response to protesters attempting to “cross the fence at the PD entrance,” where a separate group had been demonstrating throughout the afternoon.

McClain, 23, was killed on Aug. 24, 2019, when officers responded to a call of a “suspicious man” with a ski mask. Officers confronted McClain, who was eventually placed in a chokehold and body camera footage shows him being wrestled to the ground vomiting and screaming “I can’t breathe,” as police detained him.

Three days later, McClain was declared brain dead and an autopsy as to the cause of his death was found inconclusive.