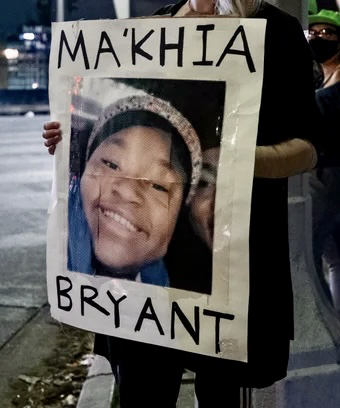 A Columbus, Ohio, policeman shot and killed a Black foster child named Ma’Khia Bryant in response to a 911 call.

Allegedly, Bryant was threatening to stab other teen girls at her foster home.

RELATED CONTENT: WHY THIS WOMAN LAUNCHED AN ORGANIZATION TO HELP FOSTER CARE YOUTHS

According to USA Today, Franklin County Children’s Services confirmed the life of a 16-year-old—some outlets say 15-year-old—was taken by the police at around 5:30 p.m. on Tuesday.

Some media outlets are saying Bryant’s death eerily coincided with the Derek Chauvin murder trial’s verdict, which was announced around the same time as the shooting.

The young woman’s death was also confirmed on Twitter by the city’s mayor, Andrew Ginther. In addition, the mayor said the police wore body cameras and footage of the confrontation exists.

This afternoon a young woman tragically lost her life. We do not know all of the details. There is body-worn camera footage of the incident. We are working to review it as soon as possible. BCI is on the scene conducting an independent investigation . . .

Ginther wants residents to remain calm when they decide to protest.

“This afternoon a young woman tragically lost her life,” Ginther said. “We do not know all of the details. There is body-worn camera footage of the incident. We are working to review it as soon as possible.”

Bryant was taken to Mount Carmel East where she was pronounced dead.

On the night of the scene, the Ohio Bureau of Criminal Investigation started looking into the shooting.

The New York Times reported that the teen’s aunt, Hazel Bryant, confirmed there was an altercation at the home the young women shared.

There is not much information available to the public, but the Bryant family enlisted the help of Ben Crump who shared some information on his Twitter page.

“As we breathed a collective sigh of relief today, a community in Columbus felt the sting of another police shooting as @ColumbusPolice killed an unarmed 15yo Black girl,” Mr. Crump said. “Another child lost! Another hashtag.”

The Columbus Division of Police did not respond to The Times’ questions.