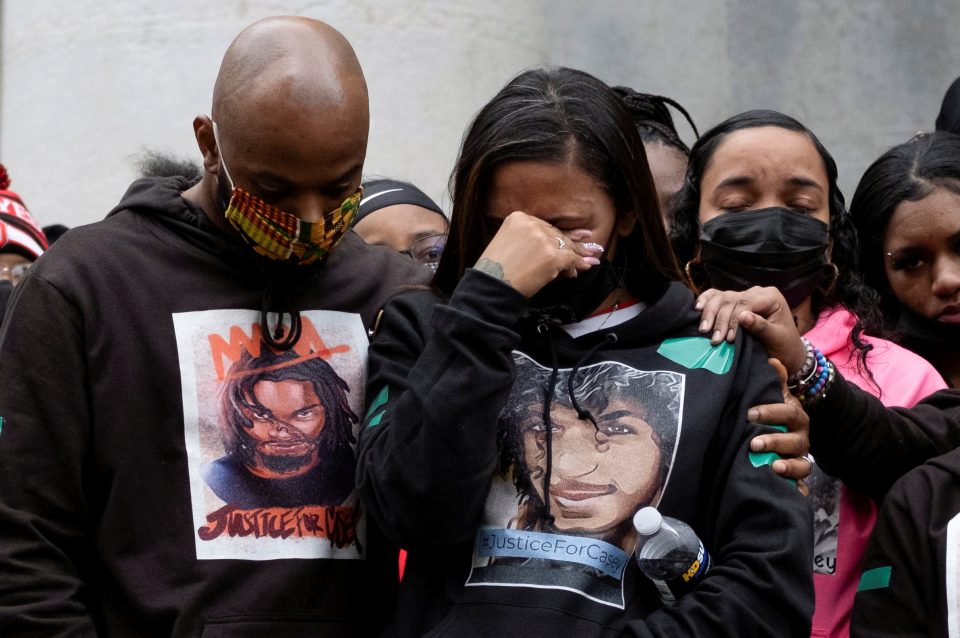 Sean Walton, the family attorney, comforts Tamala Payne, the mother of Casey Goodson Jr., a 23-year-old Black man who was killed by police last week as he entered his home, as people gathered to protest outside of the State House in Columbus, OH, December 12, 2020. (REUTERS/Seth Herald)

Police in Columbus, Ohio, said it relieved an officer of duty on Tuesday after fatally shooting an unarmed Black man, the city’s second law enforcement shooting death of a Black man in the past month.

The latest incident unfolded in the early hours of Tuesday after officers responded to a non-emergency complaint about a man turning a car on and off for an extended period, Columbus police said in a statement.

Shortly after the officers arrived, a man who had been inside a garage approached them on foot with his left hand holding a cell phone and his right hand not visible, police said, citing video from a body-worn camera.

One of the officers then shot the man, who died later at a local hospital, they said.

The incident is the latest in a spate of killings of Black Americans by police in the United States this year, including one in Columbus on Dec. 4, that have triggered waves of protests over racial injustice and brutality by law enforcement.

Hundreds of protesters demonstrated peacefully in downtown Columbus on Dec. 11 after a Franklin County sheriff’s deputy shot and killed Casey Christopher Goodson, 23, outside his home.

Federal authorities have launched an investigation into Goodson’s killing.

In Tuesday’s shooting, a preliminary investigation indicated that the victim, identified only as a 47-year-old man, was visiting someone at the house, police said. No weapon was found at the scene, police added.

Although neither officer activated their body cameras until just after the shooting, police said it was captured on video, but not audio, because of a 60-second “look back” function.

“This is a tragedy on many levels,” Columbus police Chief Thomas Quinlan said in a statement. “Most importantly, a life has been lost.”

Quinlan said he relieved the officer involved in the shooting of duty, requiring him to turn in his badge and gun, pending the outcome of an internal review and an investigation by the state authorities.

Columbus Mayor Andrew Ginther said on Twitter late on Tuesday that it was “unacceptable” for the officer not to have turned on their cameras.

(Reporting by Peter Szekely in New York and Maria Ponnezhath in Bengaluru; Editing by Bernadette Baum and Chizu Nomiyama)