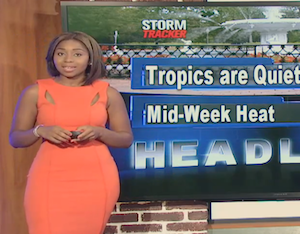 In recent news, residents in Hawaii are bracing for two tropical cyclones that could be disastrous for the region. What are some ways that people can prepare just in case there is a direct hit?

It’s looking like double trouble for Hawaii right now. The first storm Hurricane Iselle is expected to downgrade to a tropical storm by the time it makes landfall. There are many factors that go into the weakening of a hurricane. One major component is the wind shear out in that part of the ocean. There are fast moving winds high up in the sky on the northern periphery that keep ripping the thunderstorms apart. Therefore the hurricane isn’t getting the opportunity to define its circulation. There is also a ton of dry air. It will come in contact and that will kind of choke the storm.

Barreling down not far behind Iselle is Hurricane Julio. Also expected to weaken just a bit before landfall. However, I must state that just because these storms are weakening doesn’t mean they aren’t packing a punch. If I got in the ring as a novice MMA fighter versus a champion fighter, the chances are I’m going to be down for the count! Same goes for Hawaii. They will most likely experience flooding, power loss, and damaging winds. I use to go to high school there and I reached out to my friends to make sure they were preparing.

I was told they are out of water on grocery store shelves. I told them to make sure they have a first aid kit, water, any medication needed, and non-perishable food items. I also told those living in low-lying areas it may not be a bad Idea to visit some family mountainsides for the next few days. My prayers are truly with them.

For those who are only familiar with Al Roker, can you talk about other impactful black meteorologists in the industry? Also, please note any interesting accomplishments that our readers might be curious to know.

The one thing I love about science today is that we often see numbers as oppose to colors and creed. But there have still been some awesome pioneering African American meteorologists on TV that have been my mentors. Vivian Brown of The Weather Channel who has been there for over 25 years. She is so kind and knowledgeable. Janice Huff, Chief Meteorologist at NBC4 New York, and for quite some time was on the weekend “Today Show.” She helped me stick it out in college when things got difficult. Chief Meteorologist Markina Brown of CBS Atlanta is a poised and intelligent role model for so many women and young girls, and taught me how to present effectively in TV weather.

As for accomplishments, well, personally, I just finished an entire season of “Doctor Who” in a few days. I also just beat my all-time high score on “Galaga.” But what I can say that was truly awesome was I achieved my dream of doing a TEDx Talk. It was so much fun. I spoke on the evolving identity of a first generation American.

You also were on the other side of the game as an anchor recently. Can you talk about the business of being in the news and where do you see yourself ultimately in five years?

ST: I got the awesome opportunity to anchor the morning show as a fill in for a few days. It was different and new. I liked it. Being in the news business can sometimes be rather tedious, however very rewarding. It is a rush of sorts. There’s the opportunity to communicate a dense amount of information in a concise and short time frame. In weather, you are not reading from a prompter, so therefore, you have to be very familiar with your content. In five years, I hope to be happy no matter where I am in the industry.

In addition to your degree in meteorology, you also hold accreditation in energy business and finance. With that in mind, what are your thoughts on President Obama’s attempts to create a greener environment? Also, can you share what you believe the average Joe can do to do their part?

You know there is a strong dichotomy in the meteorology community when it comes to the headline of climate change. It’s a hot topic with deeply rooted scientific and political ties. Whether some believe it exists or that it has the drastic impact some theories show is up for debate. However, whether or not there are any cars around you, you should always stop at a red light. Therefore, whether the deterioration of our planet is due to anthropogenic sources or paleo-climatic sources, we should still take care of it. I am all for a greener society, but not because of mitigation platforms but rather because it is the right way to treat something that brings forth sustenance and life.

As you continue to embark on your journey, what are some goals that you want to accomplish that will not only impact your industry, but your direct community?

ST: I want to show people how to create in an environment where they are free to dream. That is my unique goal. It is simple and short, but it is a real passion of mine that I think will make a major change in the lives of others.