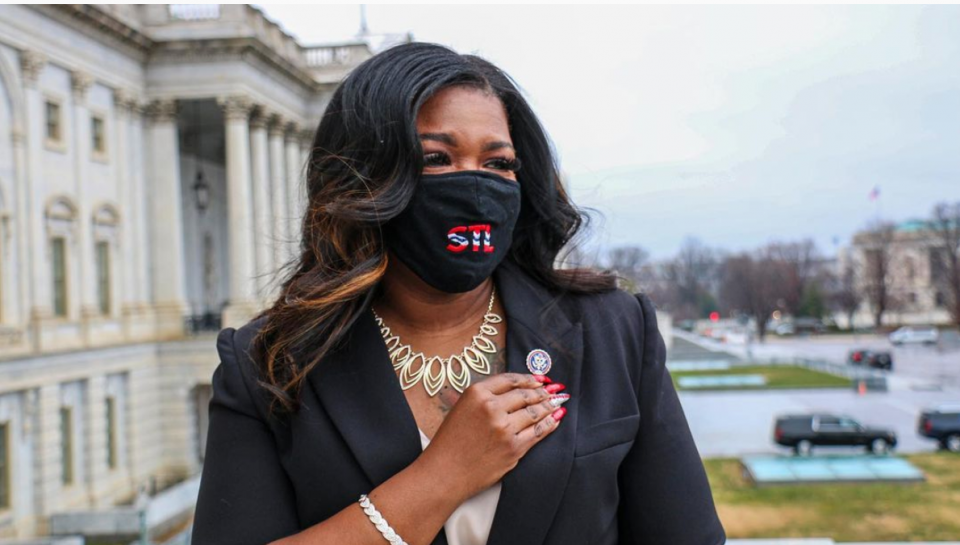 “This coup attempt is white supremacy in action,” Bush wrote on Twitter Wednesday. “The Republican members who incited the attack on our U.S. Capitol by working to overturn the results of this election must be expelled from Congress.”

As the first Black woman to ever represent Missouri in Congress, Bush is letting her voice be heard. In response to the disturbing events that happened this week, she is proposing legislation that would expel Republican lawmakers.

“My first piece of legislation would ensure that the actions by some of my Republican colleagues to suppress our votes, undermine our democracy, & incite white supremacist violence do not go without the appropriate consequence,” Bush wrote on Twitter Friday. “They must be investigated & expelled from Congress.”

She added, “They have broken their sacred Oath of Office.”

Wednesday’s attack on Capitol Hill led to smashed windows, poop in the hallways, and destroyed furniture. Thousands of Pro-Trump rioters barged into the U.S. capitol destroying everything in sight with flag poles and other items.

Unfortunately, the worst was yet to come. Police officers were assaulted and others suffered from medical emergencies as the Capitol was under attack. The aftermath left five people dead, according to CNN. Capitol Police Officer Brian D. Sicknick died on Thursday after he was taken to a local hospital. Air Force veteran Ashli Babbitt was fatally shot by U.S. Capitol Police.

“Every day the President remains in office is a grave threat to the viability of our very democracy,” Bush wrote on Twitter Thursday. “He must be removed from office immediately—either through the 25th Amendment or impeachment.”

According to The New York Times, many other elected officials are also on board to impeach Trump.

An article of impeachment is planned to be introduced on Monday charging President Trump with “willfully inciting violence against the government of the United States.”

If Trump is impeached, he would go on record as being the first president in U.S. history to be impeached twice.

As the nation is trying to determine what’s next, others have already decided to step down from their positions. West Virginia Lawmaker Derrick Evans, via a statement, announced on Saturday that he will resign from the House of Delegates. He was found filming himself storming the U.S. Capitol. Police Chief Steven Sund will also resign effective January 16, according to The Guardian.

“98% of the calls my office has received from Missouri’s 1st District about my resolution to expel—and also @Ilhan and my resolution to impeach—have been in support,” Bush wrote on Twitter Saturday. “St. Louis, I hear you loud and clear. We’re in this fight together.”