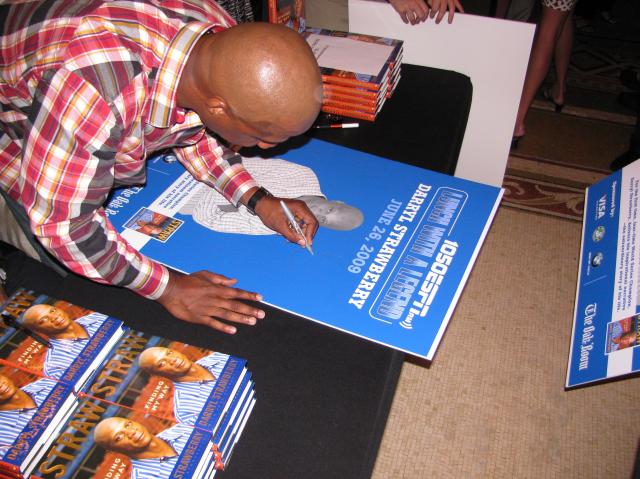 Strawberry at a book signing

Last week I had the opportunity to attend 1050 ESPN Radio‘s “Lunch with a Legend,â€ seriesÂ  at the Oak Room in New York City in honor of former Met and Yankee Darryl Strawberry and author of Straw: Finding My Way (Ecco; $26.99). He’s been called the firecracker of New York, the city’s wild child, and known to have an angry edge but that day fans saw a much gentler side of Strawberry when he shared the hardships of his childhood and how they played a role in the choices he made as an adult.

Growing up in a home with an alcoholic father, who Strawberry says “would beat the living crapâ€ out of him and constantly remind him that he would never amount to anything, put the all-star into a state of depression where he would later turn to drugs and alcohol to numb the pain. He held onto these scars for years and did not seek professional help because that is not something that “African Americans generally do.â€

“In the African American community we have to be strong,â€ Strawberry said. “As black men we are groomed not to feel it or talk about it.â€

These words left me thinking: How many people, African Americans in particular, with symptoms of depression refuse to seek professional help because of the stigma in their communities/families/or churches? It’s no secret that some African Americans believe that seeing a psychiatrist is a “white thingâ€ and that black people should just go to church. Although I am a strong believer that the Lord can cure all things, that doesn’t mean that believers can’t seek professional help which includes psychiatrists, psychologists, pastoral counselors, social workers, or medication.