Nationwide Business Shut Down for 'Day Without Immigrants' Protest

In cities around America, thousands of construction companies, restaurants, and other businesses took part in the combination boycott/strike today, to highlight the contributions of immigrants to U.S. business and culture–particularly, Latino immigrants. Business owners and immigrant workers showed their willingness to sacrifice income in order to drive their point home by offering limited service or shutting their doors completely, in support of the Day Without Immigrants.

Organized through social media, the one-day boycott/strike, urged immigrants–whether they were citizens or not–to not go to work, open their businesses, spend money, or send their children to school, in reaction to Donald Trump’s views on immigration, and his promises and actions regarding deporting unauthorized immigrants, building a wall along border between the U.S. and Mexico, and using “extreme vettingâ€ on immigrants from select countries–including his recent effort to enforce a travel ban on citizens from seven Muslim-majority countries, which is now on hold.

Some businesses were closed for the day, while others stayed open and pledged to contribute a share of the day’s proceeds to nonprofits that aid Latino communities. ABC News also reported that some schools and daycare centers were closed, with teachers reporting low attendance numbers on social media.

Celebrity Chefs Stand Up With Their Staff

According to The Washington Post, data compiled by the Institute for Immigration Research at George Mason University shows that immigrants make up nearly 23% of the national workforce. Thus, it seems as though the restaurant industry will be most affected by the strike.

However, “in a number of cases, business owners were abiding by their staffs’ wishes, after holding votes to decide whether to open,” reports NPR. For instance, celebrity chef Rick Bayless, who is famous for popularizing the complex flavors of Mexico’s cuisine, says he closed four Chicago restaurants for the day, out of respect for his staff’s vote.

Protesters say that the idea is to send a message that the “country is paralyzedâ€ without immigrants, who do everything from run corporate boardrooms to clean them. Hundreds of business owners in San Jose, California; Des Moines, Iowa; Washington, D.C.;Â  Pittsburgh; Boston; Philadelphia; Austin, and other cities are participating in the protests, according to various news reports.

L.A. county Supervisor Hilda Solis told NPR that “immigrants, regardless of legal status, contribute 40% of Los Angeles county’s gross domestic product: almost $300 billion a year. Thousands of immigrants are skipping work; not shopping; not eating at restaurants, buying gas, or sending their children to school in the region. It’s incumbent on us to be brave, which we’re prepared to do.â€

Solis went on to say that it was time “to step up; to say to him, ‘Not in my house, not in my county, not in my state.â€

4 Reasons Why You Need to Move Out of the U.S. for At Least a Year 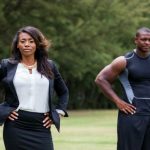 FacebookTwitterYoutube
← 4 Reasons Why You Need to Move Out of the U.S. for At Least a Year ← Tropical Smoothie Cafe: Winning Franchise Choice for Athletic Husband and Wife Team
×
'