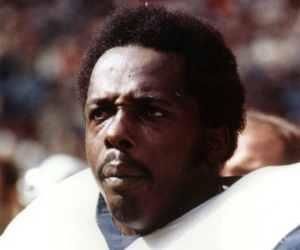 The man who has been given credit for creating the term ‘sack’ in professional football has died. David “Deacon” Jones, a Hall of Fame defensive end, has died at the age of 74.

According to ESPN, the Hall of Famer died of natural causes at his home in Southern California on Monday night. He made his entry into the Pro Football Hall of Fame in 1980 and made the league’s 75th anniversary all-time squad.

“Even with his fellow Hall of Famers, Deacon Jones held a special status. He was an icon among the icons,” commissioner Roger Goodell tweeted Tuesday. “He is warmly regarded by his peers not only as one of the greatest players in history but also for his influence & sense of humor.”

He also made special appearances on some television shows — including episodes of “Bewitched,” “The Brady Bunch” and “The Odd Couple” — and appeared in the 1978 Warren Beatty film “Heaven Can Wait.”