Deion Sanders Dances With Joy After Landing Yet Another Top Recruit, Kevin Coleman 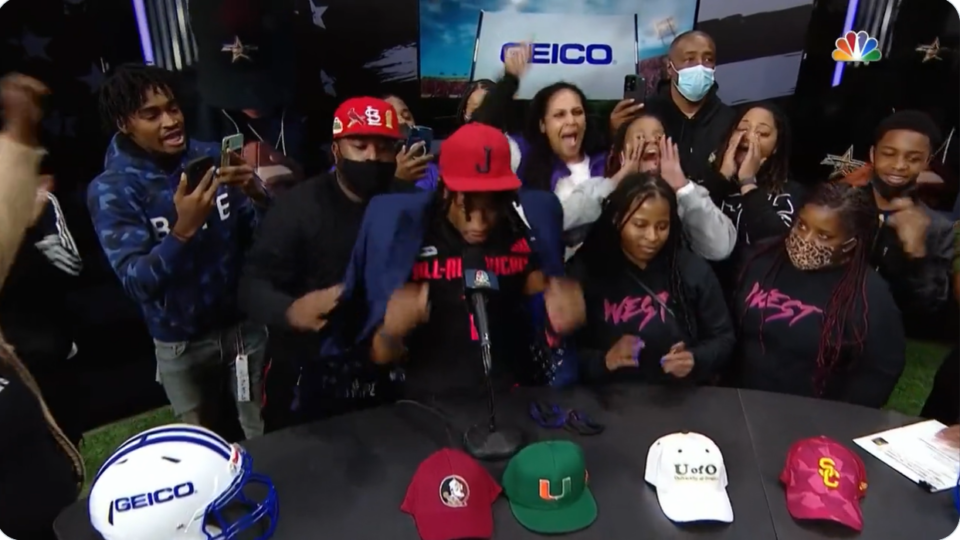 When former NFL great Deion Sanders committed to coaching at Jackson State University, he vowed to change the culture there and stated that Black athletes should start considering playing at historically Black schools.

In his attempts to level the playing field for Black collegiate athletes, Sanders is keeping his word by signing his second top prospect for the upcoming football season.

Sanders is on a roll and now has a commitment from wide receiver Kevin Coleman, an elite four-star pass catcher, to join “Neon Deion” at Jackson State University, according to The Spun.

The incoming freshman chose the HBCU over Florida State, Miami, Oregon, and the University of South Carolina. Last year, Sanders signed the No. 1 prospect, Travis Hunter.

On Saturday, Coleman announced that he was “taking his talents” to play with Hunter.

Jackson State just picked up a commitment from the #4 WR in the nation: Kevin Coleman. @DeionSanders can’t stop winning!! @GoJSUTigersFB

Sanders sent his message via social media when the announcement was made public.

I’m in my family room doing the nae Nae as u read this! https://t.co/m6Y1Z8sSlJ

“All my life what everyone call me is just different,” Coleman expressed to 247Sports Tom Loy. “I had to be different. Travis Hunter is one of my best friends. When he made that move I been wanting to make that move. When he made that move I couldn’t leave him alone. I feel like he the best DB and I’m the best receiver. I want that relationship to stay tight. I want us to grow together. I want us to compete every day against each other.