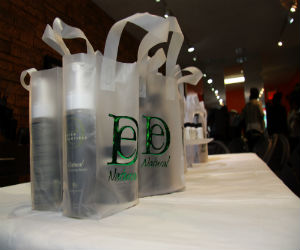 More than 50 black women gathered atÂ a salon on Flatbush Avenue in Brooklyn for “Curls and Conversations,” a support group for black women who wear their hair natural;Â the event was alsoÂ a sampling party for the Design Essentials natural hair care line,Â â€ªone of many such dialogues the Atlanta-based hair care company has hosted since its national retail expansionÂ into Sally’s Beauty Supply and Walgreens.

“If you did ‘the big chop’ raise your hand,â€ Ketlie Hyacinthe, a Design Essentials rep says to the group of women munching on fresh fruit and finger food. The Big Chop refers to when a black woman cuts off all her processed hair down to a very-short ‘fro. About half the room raised their hand.

“And if you transitioned out raise your hand,â€ the Design Essentials rep says. The other half of the room raised their hand. Transitioning refers to slowly letting one’s chemically-straightened hair grow out into a curly natural mane over time.

The natural hair care line is a recent addition to the Design Essentials family of products which includes everything from relaxers to permanent waves to hair color.

Even though the bulk of the Design Essentials products are available exclusively through authorized distributors and select salons, president, general manager, and son of the founder, Cornell McBride Jr., thought it best to make the natural hair products more accessible since most natural hair styles are “do it yourself”, thus the recently brokered deals with Sally’s and Walgreens. And now, the company is looking for a mass-merchandising partner like Wal-Mart or K-Mart, as well as a grocery store distributor for the natural line. The company already has what they call “prestige partnersâ€ who carry their products like JC Penny’s and Hair Cuttery Salon.

However, like Amway, Avon and Mary Kay, the sole proprietor distributorship is the backbone of the Design Essentials business model, and the company claims to have helped establish hundreds of business owners and to have helped make several millionaires.