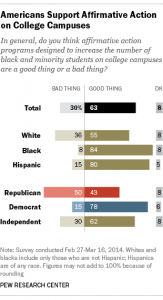 Last week, when Michigan’s affirmative action ban was upheld by the Supreme Court a strong divide was made between those who support the decision and those who don’t.

Despite controversy surrounding the topic, new data released by the PEW Research Center finds that 63% of Americans strongly support affirmative action programs and believe that they’re needed to help increase diversity. According to the data, 84% of African Americans believe that affirmative action is a good thing, with 80% of Hispanics and 55% of whites also showing support. In terms of political party breakdown, 78% of Democrats are in favor of the program, compared to 43% Â of Republicans.

In response to last Tuesday’s Michigan ruling, CNN reports Justice Sonia Sotomayor expressing her disappointment and saying: “For members of historically marginalized groups, which rely on the federal courts to protect their constitutional rights, the decision can hardly bolster hope for a vision of democracy that preserves for all the right to participate meaningfully and equally in self-government.”