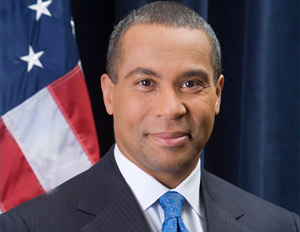 Former Massachusetts Governor Deval Patrick’s latest career move is proof that he was 100 percent serious when he said he will not be running for president in 2016.

On April 14, Bain Capital announced that the former governor will be joining the private investment firm to start a business that will focus on gaining attractive financial returns by investing in projects with significant, measurable social impact. In addition to leading the new business, Patrick will also serve as a managing director of the firm.

“Bain Capital is widely recognized as both an innovative investment firm and a philanthropic and community leader,” said Patrick in a statement. “I am thrilled to work with such a dedicated team to connect these two strengths, and I am confident that we can find compelling investments that deliver both attractive financial returns and positive social outcomes.”

Patrick holds years of experience under his belt in politics, law and public service. In 1994, he was selected by then President Bill Clinton to serve as the United States Assistant Attorney General, where he worked on issues pertaining to racial profiling and police misconduct. Last year, following the death of Michael Brown and the uproar it caused in Ferguson, Patrick told a local Fox station in Boston that he was “sick of unarmed black men being shot by police.”

“I’m sick of the lawlessness on the streets. I think everybody’s tired. When are we gonna get through with this kind of thing? I’m hopeful, with the Attorney General of the United States going out, that federal law enforcement will be fully engaged, and I hope bring to a decision quickly. But that’s a really tough mission that he’s set out on, and I know that from some experience,” My Fox Boston reported him saying.

Patrick will be based at the firm’s Boston office and while the investments of his business will be mainly focused in the U.S., they will also leverage Bain Capital’s network of offices and relationships around the world. His business is expected to pursue investment opportunities with social impact in education, health, energy, environment and neighborhood development.