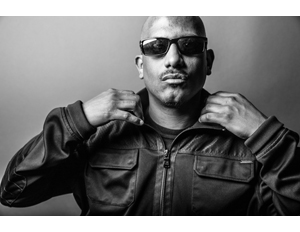 From Surviving to Living

Divine emphasizes the company is not marketing the BLAK card as a “poor person’s card.â€ Instead, he sees the product as one for the “urban entrepreneur.â€

“We know a lot of people in our urban African American communities are very innovative; very creative, because they are survivalists,â€ he says.

“We are able to present a product that takes them from a survival mindset, to a living mindset. We don’t just want to survive. I want to live. I want to be able to take vacations, have a 401k; have a nest egg. Be able to pass on generational wealth instead of generational debt.â€

The BLAK card is the embodiment of Divine’s aspirations for economically empowering people in urban areas. He knows, firsthand, the needs of these communities, because, as he states, “I am that demographic.â€

Raised in Brooklyn by a former crack cocaine-addicted mother, he turned to the streets; surviving as a drug dealer. As a result, he spent 10 years in lockup, but while incarcerated, read an article that would change the course of his life.

“I came across an article about Ben Horowitz.â€ Horowitz is a venture capitalist and co-founder of Andreessen Horowitz, one of the top and most influential investment firms in the country.

Divine was intrigued not only by Horowitz’s success, but by the venture capitalist’s love for hip-hop and rap; a music passion both of them share. After his release, Divine sought out Horowitz via social media, expressing how much he related to a blog post Horowitz wrote, Legend of the Blind MC.

One thing led to another, and Divine ended up not only friends with Horowitz, but also with his equally influential wife, Felicia.

“I always say, Ben opened the door for me, and Felicia ushered me in,â€ he says. “I was doing a Kickstarter at the time, to raise money for my album.â€ The Horowitzes helped Divine raise the funding ($7,000) for his music, and he dropped the album Ghetto Rhymin in 2014.