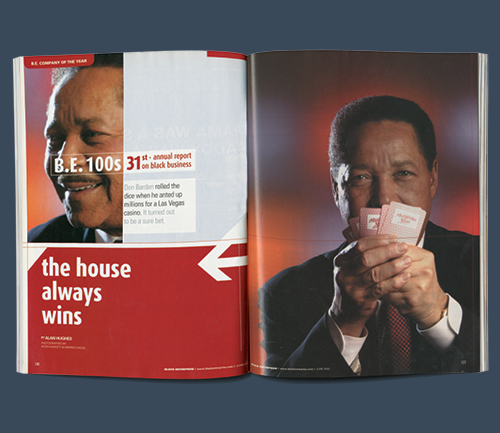 DON BARDEN
THE BARDEN COS.

The late Barden focused on developing a portfolio of well-run, highly profit-able companies–and managed to achieve that goal in two industries. In 1981, he entered uncharted territory for Black entrepreneurs by developing the largest Black cable television operator through the acquisition of franchises in Inkster, Michigan, and Detroit, growing revenues from $600,000 t0 roughly $91 million within a decade. After selling his cable operation to Comcast for about $115 mil-lion, Barden decided to make his next fortune, managing the only Black-owned gaming conglomerate in the country. He made history with the acquisition of three Fitzgeralds casinos for $149 million in 2002, making him the first African American to own casino operations in Las Vegas, the industry’s largest U.S. mar-ket. As a result of these forays, he earned BE Company of the Year honors in two areas: in 1992 for Barden Communications Inc. and in 2003 for Barden Cos. Inc.