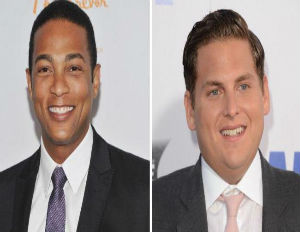 Lemon allegedly tried to say hello to the Superbad actor after recognizing him at a hotel.

“Said hi to @jonahhill in hotel. Think he thought i was bellman. Didn’t know his name til bellman told me. A lesson to always be kind,â€ Lemon tweeted. The anchor even vented his feelings about the incident on Soledad O’ Brien’s show on CNN, saying that Hill “treated him like the help.”

Hill, who plays a slave driverÂ in the upcoming Quentin Tarantino filmÂ Django Unchained, responded :Â “I said hi what do you want me to do move in with you? I was in a hurry. Didn’t realize you were a 12 year old girl. Peace,â€ he tweeted. “I walked out of the restroom and found you waiting for me. Shook hands, said hi and was on my way. Sorry if you found that rude.â€