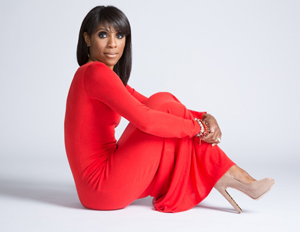 You were diagnosed with cancer, you beat it and then you were diagnosed again. What was it like hearing that news for the second time, and what lifestyle changes did you make to put your health first?

I got this book that I’ve been writing and it talks about being a patient and being a doctor. And I say I knew enough to not be terrified, but I knew too much. I battled the good and evil of knowing. I knew too much that they didn’t have an answer for, so that made me a little nervous. It was one of those things that I used my faith to get through, saying, “You know what? This is not death. It’s an early diagnosis. We can treat it.â€

The second time around, I was really shaken because… in the same scope of that time period I had been declared infertile from the chemo. I had a whole bunch of OBGYN stuff going on: breast cancer, infertility. I stayed positive, I changed the way I was eating, I started making fitness my passion. I said I have to do my part, and the rest, God, is up to you.

How long has it been since you beat your diagnosis?

The first time I’m ten years out and the second time I’m six years out!

What steps should women take to keep their reproductive health in check?

Do your preventive health, drink water, exercise. Take care of yourself. Women who smoke, they don’t realize they ding their ovaries. You definitely need your folic acid so that in your reproductive age you have less chance for neural tube defects. Multivitamins make a difference, because American women eat poorly and we need those supplements or amino acids so that we’re maintaining healthy eggs. And know your family history.

As driven career women, we often see women who are so invested in their professional lives. Then, one day they’re 40 and feel the need to rush and have babies. For women who want children, when should they start shifting more focus to starting a family?

At age 35 you’re in the crossroads. Now, what’s happening at 35? Those eggs have been there since you were in your mom’s womb, and they’ve been through all life cycles with you. The sun exposure; the poor eating; the smoking, so we’re damaging those eggs. At 35 your pituitary rate starts to decline, and your risk of abnormal fetuses, birth defects and genetic abnormalities start to go up right at that point. You go from one in thousands of a baby with Down’s syndrome to one in 400. Your risk is starting to climb and your chance of getting pregnant is starting to drop.

On an episode of RHOA, Kandi and Todd came in to see you after they’d been trying to have a baby. In an instance where it is a matter of infertility, how do you recommend that a couple cope with that?

I think first and foremost we have to recognize that 40% of the infertility is the man. When you can get to the cause it will ease a lot of anguish between the husband and wife. Crazy enough, when it is the man who is infertile, it is so much harder for them to digest than it is forÂ the woman. Now, we do have to stroke men up a little bit more than they would stroke us back because of ego, but you just have to be really gentle with men. They think it’s linked directly to sexuality. If you’re having infertility issues then you’re not having good sex. Well, that’s not true at all. They have to know that we’re in this together, whether it’s me or you, and we’re in it to win it.

Some of it is strictly psychological. They’re so stressed about getting pregnant… We see once they release and let it go, they adopt, then they get pregnant.