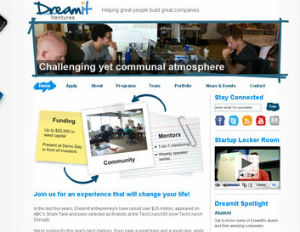 The DreamIt Access Accelerator Program — which provides coaching and capital — is looking for entrepreneurs nationwide to take part in a program to be held in the Austin and New York City metropolitan areas.

The program was launched in May 2011 and grew out of a partnership between DreamIt Ventures (a startup accelerator program) and Comcast Corp., to provide opportunities for minority-led startups.

“Basically, both groups agreed that there was clearly a lack of those companies in the tech space and felt like there was an opportunity to do something about it,â€ says William Crowder, managing director for DreamIt Ventures. “Comcast was involved, largely because they were looking for new opportunities to impact diversity in a tech space.â€ Comcast is also the lead sponsor.

The Accelerator Program, within DreamIt was designed to be a vehicle for providing startups with everything that they really need to move their business forward. Each company that’s selected receives $5,000 and then for each full-time member of the company, capped at $25,000. But the program isn’t just about the capital. Described as an intense three-month crash course, participants will work side-by-side with mentors and other entrepreneurs in a provided office space. The program also connects entrepreneurs with potential investors and partners.

“Every company receives a dedicated mentor who, in most cases, is someone who has been running a startup, has run several startups, and has experience in exit [strategies],â€ says Crowder. “They meet with them three to five hours a week.â€

Each company has an in-depth meeting with the partners to talk about where they are, what they need, what they’re struggling with, and the mentors actively get involved to help the entrepreneurs figure out the best course of action to take.

“We have entrepreneurs that come in and will do panels or they may do small group sessions to talk about some particular issue or challenge that they had to work their way through,â€ says Crowder. “All these things are just additional data points for our entrepreneurs to help build out and round out their knowledge and their skill sets.â€

The program also provides access to VCs, angel investors and entrepreneurs are able to pitch their business, get feedback, and perhaps find new investors. The program culminates in Demo Day, a big pitch event where the companies get a chance to deliver seven-minute pitches about what their business is, what it’s they are trying to accomplish, and why the audience should invest in them. According to Crowder over 400 people attended Demo Day in New York City earlier this year.

Upcoming programs are scheduled for Austin in Jan 2013 and in New York for the summer of 2013. For information about the program, visit DreamIt’s information page.