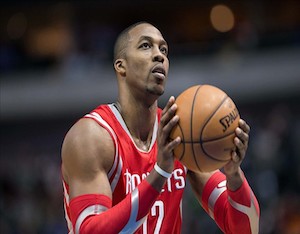 Houston Rockets center Dwight Howard might be living it up at the top of the standings, but he’s facing some real harsh off-the-court drama.

After recently being cleared of child abuse charges in Florida, Cobb County police in Georgia are investigating the former Defensive Player of the Year for a similar crime. Reopened Tuesday, the case originally stemmed from this summer, where Howard was mailed a report from the Howard Phillips Center for Children and Families in Florida.

The Cobb County police are alleging that the star basketball player abused his 7-year-old child. According to Sgt. Dana Pierce, the incident was reported on Oct. 1, 2014. In the last 48 hours stemming from the report, more information has come forth that has led police to take another look at the case.

While no arrests have been made, there also aren’t any other details about the allegations available online or through press release. “We are aware of the allegations concerning Dwight Howard and are in the process of independently gathering the facts,” NBA executive vice president of communications Mike Bass said to ESPN.

The Houston Rockets organization has declined to comment on the case.

“The Florida Department of Children and Families thoroughly examined all of the evidence and determined that the claims of child abuse were not substantiated. The case was closed in September.

“(The child’s mother) Royce Reed is now shopping her baseless allegations to authorities in Georgia after the Florida DCF case was closed. Even though the allegations have already been found to have no merit, when a complaint about the welfare of a child is made to law enforcement, an investigation is commenced. We are confident the Georgia authorities will reach the same conclusion as the Florida authorities. The truth is on our side.

“It is appalling to see a mother use her son as a pawn against his father in attempt to extract money, which is what is happening in this case. While Royce Reed continues on her aimless quest with the media, Dwight Howard will continue to act in the best interest of his children and do whatever is necessary to protect them.”

Howard, 28, is an Atlanta native who has had previous stints playing for the Orlando Magic and the Los Angeles Lakers.