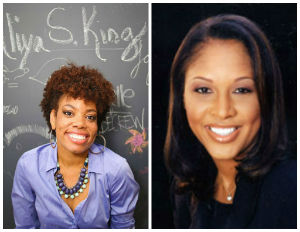 Both Ebony magazine and the Minority Media and Telecommunications Council have announced that they’re adding new and exciting people to their respective teams.

“I have followed Aliya’s work for years, and I think she’s an amazing writer,” said Ebony Editor-in-Chief Mitzi Miller. “I am excited to have the opportunity to work with her at Ebony as we continue to grow the brand and legacy of this iconic magazine.”

Prior to joining Ebony, King was responsible for covering news, pop culture, and video production for Vibe and Vibe.com. She’s held editorial positions at other publications including Billboard, The Source, Upscale, Giant, and many more, making her a well-respected name in media.

Aside from writing nearly 50 cover stories on A-list stars including Chris Brown, Faith Evans, Kelly Rowland, and Queen Latifah just to name a few, King is also the author of several books including Platinum and Diamond Life, and the co-author of New York Times best-selling book Keep the Faith, which she co-wrote with Faith Evans.

In addition to Ebony and King’s exciting announcement, the Minority Media and Telecommunications Council has appointed Kim M. Keenan as its new president and CEO. Succeeding MMTC’s co-founder and president of 28 years, David Honig, Keenan has a long history of career success. Prior to taking over as general counsel and secretary of the NAACP, Keenan was the principal of her own law firm and served in the litigation practices of two nationally recognized law firms for more than 18 years.

A graduate of Georgetown University’s School of Foreign Service and the University of Virginia School of Law, Keenan is responsible for many tasks including addressing the need for more diversity in Silicon Valley, removing education and health disparities through technology, and improving MMTC’s mentoring and training programs.