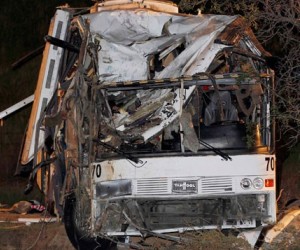 At least eight people were killed and 38 injured Sunday in a car accident that occurred around 6:30 in Southern California. A tour bus careened out of control about 80 miles east of Los Angeles along State Route 38.

The vehicle struck a car, flipped and plowed into a pickup truck, authorities said. Jordi Garcia, a manager for InterBus Tours, said, “The information that we have is that the bus’ brakes failed and the accident occurred.”

Emergency crews worked to free passengers who were trapped in the bus, which was returning to Tijuana, Mexico, California Highway Patrol spokesman Mario Lopez said.

Read the full story at CBSNews