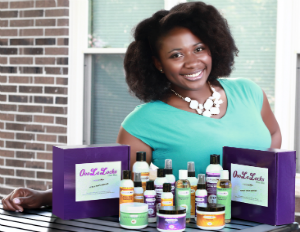 Jimmere found out about the contest on BlackEnterprise.com after buying her ticket, and when she noticed the deadline hadn’t passed, she sprang into action. But things began to fall apart from the minute she tried to film her entry video.

“I was out of town and broke my video camera,” she recalls. “I had to rush around trying to get it filmed and when I got that done, my editing software crashed. I didn’t get to upload my video until the day it was due.”

But she stuck through it, studying up and reviewing videos of past finalists and winners. She says she was practicing all the time. “Every time I saw anyone at the conference, I told them I was in the contest and asked them to critique my pitch – they all probably thought I was nuts.”

Her fear that she might miss out on some of the wisdom floating around made her attend every session at the conference even while practicing her routine.

“I learned so much and met so many people. I cannot tell you how much my business has been impacted and how I’ve grown as an entrepreneur,” Jimmere says. “The very first session was one with Rodney Sampson with Black Enterprise’s Edmond moderating. Rodney was speaking about business and exit strategies and the need to think about businesses as investments. People didn’t attend that session because they were still flying in but I felt like it was such a disservice for those who weren’t able to attend that and gain from his wisdom. I just believe you need to be there all three days to hear everything and soak it all in.”

She adds, “It was just a phenomenal opportunity. If anyone has plans to be in the competition I highly encourage you to not hesitate.”

The next Black Enterprise Entrepreneurs Conference is in 2015.

Potential candidates for the pitch contest should send a video submission via youtube with a run time of two minutes or less. Candidates should tag the video “BE Elevator Pitch Competition” with the name of their business. Send your video link before the deadline to BEEvents@blackenterprise.com and include your name, email address, and phone number. Finalists receive a complimentary registration to the conference and are typically allowed one guest.

You’ve got time to prepare. See you next year.