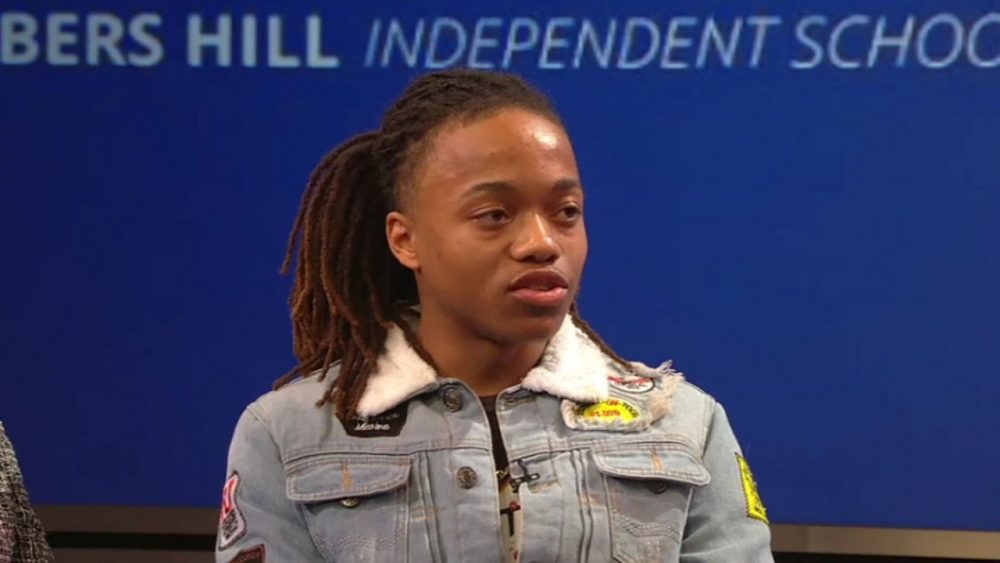 A black teenager who has not been allowed to return to class at his Texas high school because he won’t cut his dreadlocks has found support from Ellen DeGeneres and Alicia Keys, who gifted him with $20,000.

Controversy over DeAndre Arnold’s hair heated up when the 18-year-old returned to the Barbers Hill High School, a predominantly white school in Mont Belvieu, after Christmas break. That’s when he was told he was in violation of the school district’s revised dress code policy, which states that men’s hair cannot extend below the eyebrows, past the ear lobes, or touch the collar of a T-shirt. Arnold, however, argues that he is in compliance with the policy because he keeps his dreads fixed in an up-do. Nevertheless, school officials say the length of his hair is still a violation and, as a result, he was placed on in-house suspension or given the option to attend an alternative school for students with behavioral issues. Arnold was also told that he will not be allowed to walk in his high school graduation ceremony.

“I’ve worked for this all my life. … I deserve this moment to walk across the stage and enter into life. My parents deserve this,” Arnold said about the situation during a recent episode of The Ellen Show.

“Every day I would go to school, I would be in dress code,” said the high school senior. “But the thing with them is, if it was let down, I would be out of dress code.”

DeGeneres expressed support for the teen, saying, “You get good grades. You’ve never been in trouble, ever. This is the first time anything has come up. And now, you haven’t been in school for weeks because of this situation.”

DeGeneres also noted that the dress code was arbitrary, arguing that if his female classmates can have long hair, then so should he.

“I just personally think you should be able to wear your hair however you want, especially if there’s girls with long hair,” she said. “What’s the difference if girls have long hair and if guys have long hair?”

At one point during the interview, she asked Arnold to explain why his dreadlocks are important to him.

“It’s really important to me because my dad is from Trinidad,” he told her, adding that his dreadlocks are part of his culture and heritage. “And I really wish the school would kind of be open to other cultures.”

Toward the end of the segment, Keys surprised Arnold with a $20,000 check.

“I’m super proud of you for standing up for what you know is right,” said the Grammy Award-winning singer. “I know the school needs to do the right thing.” She added that she and Ellen want to support and invest in the “greatness” he is destined to achieve.

Earlier this month, Arnold’s mother, Sandy Arnold, told NBC affiliate KPRC that she will “absolutely not” cut her son’s hair. “This is his belief,” she said. “This is a part of who he is. This is his culture. This is what we believe.” She confirmed last Friday that she has withdrawn her son from Barbers Hill High School, according to KPRC 2 News.

“People want to call us racist, but we’re following the rules, the law of the land,” he told CNN, adding that the policy is fully within the realms of the law. “We’re certainly not making this up.”