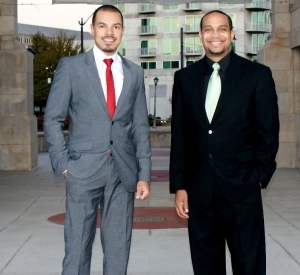 Group buying—harnessing the power of crowds to secure great deals and discounts on products from companies both local and national – has a proud Web pedigree; Groupon, which more or less pioneered the concept, has (despite some recent difficulties) turned into one of the hottest Internet startups of the last decade.

Applying that business model but focusing strictly on African-American businesses is Ujamaa Deals (ujamaa is a word of Swahili origin that has come to signify the notion of cooperative economics), an Atlanta-based business (formally scheduled to launch this fall) founded by Tre Baker and Lawrence Watkins.

The model is straightforward: “The [partner] businesses have no upfront costs, but pay a percentage of the deal amount,â€ Baker says. “For example, one daily deal may be $20 worth of food for only $10 at a local restaurant. The restaurant would give us a percentage of the $10 for each deal sold. If nobody purchases the deal, the business pays nothing. There will be one main deal and several side deals once we are able to build a sufficient deal flow.â€ Simple, and it’s been proven to work. The goal of Baker and Watkins is to focus the power of group purchases on the African-American economy, which they estimate as close to $1 trillion annually.

The duo seem well-positioned to pull it off: Baker, a 27-year-old Louisville native, he started his first business eight years ago, at age 19, and has degrees from both Vanderbilt and Harvard Business School. Watkins, also 27 and a graduate of both the University of Louisville and Cornell, is the owner of Great Black Speakers Bureau, a company that connects organizations with African-American speakers for events; he also recently founded a subscription-based Web site called Great Pro Speakers, which helps professionals turn their expertise into income by teaching them the motivational-speech basics.

The two friends’ business goals received a boost recently when Ujamaa Deals became one of the newest companies brought into the funding-and-mentoring program of 100 Urban Entrepreneurs, the nonprofit foundation that offers $10,000 startup grants and eight weeks of mentoring to talented young urban businesspeople across the country.

Baker’s confidence in particular is infectious, and bodes well for the ultimate success of Ujamaa Deals. “I can almostÂ guaranteeÂ that none of our competitors has done as much research about how to tie daily deals into the bigger picture of economic empowerment as I have,â€ he says. “This is my life.â€

Read more on Baker, Watkins and Ujamaa Deals on 100UrbanEntrepreneurs.org