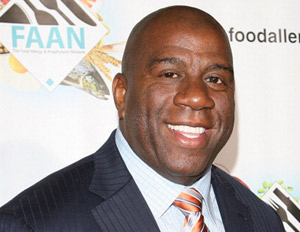 In your personal opinion, will Magic and the Guggenheim Partners regret this purchase in a few years? Do you think they can recoup on their investment?

You have to trust that they have a plan in place where they are going to draw revenue from so that team will be worth more than it its now. Look at the New England Patriots. People thought Bob Kraft was a fool for the amount of money he paid for a team that was in shambles. They needed a new stadium, the fan base was waning and some thought they should leave town. He came in and he did what most people thought was overpay for the team at $172 million, the highest price for a team in American sports history back then. Today, the Patriots are one of the most valuable franchises in the world.

So looking at that, Magic won’t regret this purchase as long as his team is able to make the purchase worth wild. I think the television deal rights will be significant in this deal for the Dodgers. If the new ownership can sell more tickets and increase the TV revenue it could bring in a significant amount of money. We could see the Dodgers become the first team in the country worth $3 billion dollars.

What are the cons to Magic purchasing the Los Angeles Dodgers?

It’s extraordinarily risky when you are paying more for an asset than anyone has ever paid before. You are risking the potential for your investment to be worth less than you paid and in comparison to any other MLB team. On the flip side, this purchase is great for every other team in MLB, including the New York Mets, who are looking to sell. A team can go into a marketplace and say, “The Dodgers got this much, so I can get at least $1 billion for my team.â€

Another issue is, you can create an unrealistic expectation in the locker room and fan base that this team is going to be significantly better than before Magic bought the team. Fans and players could think that somehow Magic’s Midas touch is going to extend from basketball to TV ratings to on the field performance [overnight]. If the team stinks and doesn’t perform well there is potential for backlash where people say, “Hey, Magic, you were supposed to make us better. What happened?â€

For example, you don’t have to look any further than the failing Charlotte Bobcats and their owner Michael Jordan. Jordan doesn’t have a very good track record as an owner in the NBA even though he is the greatest player in the game. He really has no business owning a team. Magic, similar to Jordan, runs the risk of tarnishing his reputation by creating this huge expectation of success. If the Dodgers don’t get any better it will be a huge reflection on Magic.

Is there any sort of significance to Magic, a Black man, taking ownership of the same team that integrated Major League Baseball with Jackie Robinson in 1947?

It is a little iconoclastic to have Magic behind the team that was the first to integrate baseball. What’s more important is that Magic is known to have a significant number of Blacks involved in all his deals. He employs Black MBA’s, marketers, and communication staff along with other positions throughout his organization. He also always makes it a point to do business with Blacks and in Black neighborhoods. I would expect he would make it a point to do the same with the Dodgers. If he doesn’t, I would also expect people to make some noise about it because he has made it part of his reputation.

It’s also possible Magic could change the trend of the decreasing Black audience in baseball. His presence alongside MLB’s initiative to bring baseball back to the inner city could make a difference. I don’t know how realistic it is to say that having Magic as an owner will make kids in Watts, Calif. have more interest in baseball but the possibility is there.

Lastly, you have to look at the fact that we have very few Black men, minorities or women who even own a minority stake in a team. Magic not only owns a minority stake of this team, he is being seen as the face of this deal. Also, unlike Jordan who bought a team in his sport and is very active in evaluating talent, Magic has never played baseball and is doing this strictly as a business deal. He is breaking new ground.