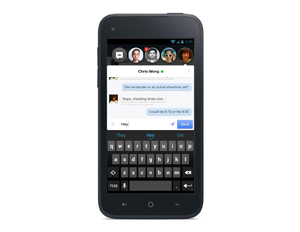 During Facebook’s highly-anticipated event today, the social media giant unveiled Facebook Home, an app-meets-operating system that allows users to spend more time on the popular social networking site.Â  So much for the long-awaited Facebook smartphone release many were expecting during the Thursday morning announcement at the Menlo Park, California headquarters.

Instead, Facebook made a phone without really creating a phone. Sounds impossible, but the social powerhouse rolled out the HTC First, an Android device that comes with Home pre-installed on it. Available on April 12 in the US, Home will be on hand for download on select devices, including the HTC First, Samsung Galaxy S III and S IV and Samsung Galaxy Note II. HTC First will be available on said date on the AT&T network for $99.99, and will come in four colors: red, white, black and turquoise.

Home has a wide selection of features that bring everything back to Facebook, like Cover Feed, which lets you see your friends’ photos and status updates as soon as you turn your phone on, and text messages and chat messages, better known as Chat heads, you can access and respond to even while using applications other than Facebook, among other features.

With a reported 680 billion monthly Facebook users logging in to the platform via a mobile device, it’s a savvy move on Facebook’s part. But for those growing tired of the social media site’s “conquer allâ€ mentality and want to keep phone/apps/os/ somewhat separate, it’s just another ploy by Facebook to have all (tech) roads lead to the networking site.

#SoundOff: What do you think of Facebook Home? Android users, do you plan on downloading Home when it becomes available? Let us know what you think in the comments section.