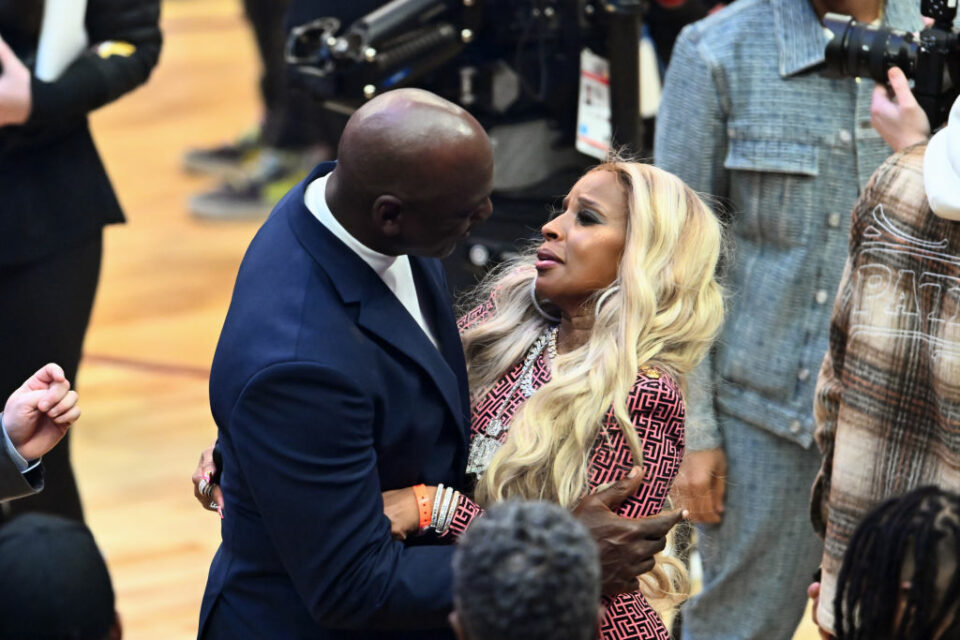 With her ongoing role in Starz’s Power Book II: Ghost and a rousing performance at this year’s Super Bowl halftime show, Mary J. Blige has been rightfully embraced lately.

Though, being embraced by NBA Hall of Famer Michael Jordan is probably not what the Queen of Hip-Hop Soul was expecting.

In a video that has gone viral, Jordan is seen hugging the R&B diva but in a way that looks like there may be more than meets the eye. The “loving” look he gives her is accentuated by a seemingly butt touch. Social media couldn’t help but make a big deal out of Jordan’s seemingly handsy embrace of the R&B singer.

It may have been “accidental” but social media definitely caught it and had several comments about it.

Michael Jordan u ain’t slick we see where you hand at 🤣🤣🤣… Mary J Blige ☺️😋 pic.twitter.com/AAkElihrYV

Mike might as well grab a hand full at this point lol #MichaelJordan #MaryJBlige #AllStarGame pic.twitter.com/ueF30oNpM6

When Tyrese tried to touch Mary J Blige leg she quickly put a stop to that, but when Michael Jordan touched her ass she didn’t say one word. 😂😂 pay attention pic.twitter.com/L4zffLuV4W

Michael Jordan touching Mary J Blige’s booty at the all star game is hilarious to me because she obviously did NOT care 😂 pic.twitter.com/CLkgJatnh2

Yo why is Mary J Blige letting Michael Jordan fill her up like that ain’t he married?

That’s has to be normal to him at this point

What’s going on #MichaelJordan #MaryJBlige – #Jordan – Imma need you to stay in your lane pic.twitter.com/lf9WUxmEIb

Now why is Michael Jordan out here Palming Mary J Blige Booty like that?? Alonzo not gon like that

Jordan hasn’t felt a fat black one in a minute and Mary doesn’t seem to mind! #mjb #MaryJBlige #MichaelJordan

#MichaelJordan just probably misses the love, embrace of a black woman. It could explain his passion filled hug, embrace, love tap on that azz of #MaryJBlige lol pic.twitter.com/2fHch6n10s