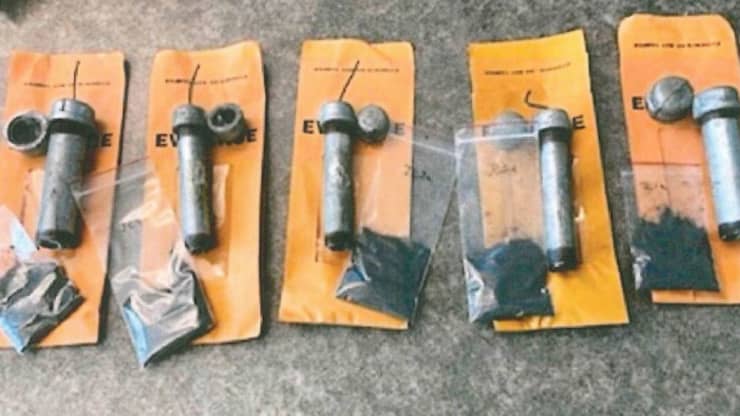 According to a release from the U.S. Attorney‘s office, federal agents and local law enforcement searched Ian Benjamin Rogers’ business January 15 and discovered the pipe bombs, along with several guns and materials used in the making improvised explosive devices (IEDs), including black powder, pipes, and end caps..

In addition to the pipe bombs, agents found several manuals including The Anarchist Cookbook, The U.S. Army Improvised Munitions Handbook, Homemade C-4: A Recipe for Survival, and the Army’s Guerrilla Warfare Handbook.

Federal agents also searched Rogers’ home and discovered at least 49 guns and thousands of rounds of ammunition plus indications that the 44-year-old Rogers may be a member of the Three Percenters far-right anti-government organization.

“I want to blow up a democratic building so bad,” Rogers, who owns British Auto Repair of the Napa Valley, wrote in a text message detailed in the criminal complaint.

In other messages, Rogers talked about attacking California Governor Gavin Newsom’s Sacramento office as well as both Twitter and Facebook “because both social media platforms had locked Trump’s accounts to prevent him from sending messages on those platforms,” after Trump supporters stormed the U.S. Capitol on January 6.

“Sad it’s come to this but I’m not going down without a fight … These commies need to be told what’s up,” Rogers wrote in another message.

Rogers admitted to federal agents he made the pipe bombs, but said they were for entertainment purposes only. Rogers’ lawyer, Jess Raphael, told CNBC the agents detonated the pipe bombs inside a stack of tires outside of his business.

“They did not even seem to damage the tires, from what I saw in the newspaper photos,” Raphael said.

Rogers is being held on a $5 million bond on state weapons charges and one charge of unlawful possession of a registered destructive device for the pipe bombs. Rogers’ lawyer told CNBC a “disgruntled former employee” whom Rogers fired prompted the investigation.

According to Raphael, the employee sent a handwritten document to the FBI in September, which the agency investigated and decided no charges would be filed. That led to the former employee sending a copy of the letter to the Napa Sheriff’s office.