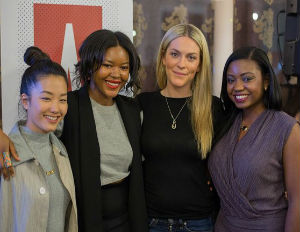 On April 16th, Her Agenda hosted a discussion with three female creatives who have figured out how to go against the grain and make a living from their passions.

The panel was composed of three women who make their creativity work for them on a daily basis. Danielle Arps, who is the go-to interior designer for startups including Fashionista, Venmo, Code Academy, and General Assembly, Sophia Chang, who is a designer illustrator from Queens, NY, whose clients range from the NBA, to NIKE to Marc Jacobs and Leah McSweeney, the founder and CEO of Married to the Mob, the first streetwear company launched by a woman for women.

Chang spoke specifically to her self confidence and resilience when it came to “hitting people upâ€ to express interest and create opportunities for herself. Being confident in her abilities made the fear of the unknown a little less scary.

“I worked really hard and I was confident [in] my own talents,â€ explained Chang when asked Â about making the leap from a stable job to independent creative. “I realized I had to leave and figure it out and go into the unknown without any actual agenda but confidence.â€

Confidence may be essential for stepping out on your own but how do you fund your dream? Panelist Leah McSweeney chimed to share how she uniquely acquired the capital for her new gig as a result of a lawsuit win involving the New York City Police Department. The 75,000 allowed Mcsweeney to leave her current nine to five.

“I used the money to, A- live off and B- fund, keep funding the companyâ€,said McSweeney, “If you’re working retail and trying to do your own line it’s really hard if you’re not putting everything into that one thing.”

Danielle Arps spoke of a more traditional approach saying she didn’t have any money saved to begin a business, therefore she adjusted her lifestyle to better accommodate her lack of income, and she also gave herself a timeline, that if not met, may have left her on the streets.

“When I quit my job I only, maybe, had three months of rent saved,â€ said Arps. She went on to say, “For me personally if I don’t have that kind of pressure built up or there’s a timeline, or that you’ll be living somewhere that you don’t want to live or not have a house–that kind of pushed me to do the best that I possible could.â€

The panel discussion ranged from finding motivation, to tapping into your confidence as an entrepreneur. Each of the ladies also provided insight into what it’s like to work as a woman in a male dominated industry.

[Below: Watch full video of the panel discussion]