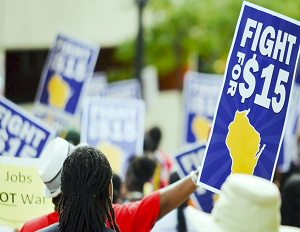 Three years ago this month, the Fight for 15 campaign launched in an effort to raise salaries to $15 an hour for minimum wage workers across the nation. Since its inception, cities across the country have held their own individual strikes in support of the movement, but spokespeople for the campaign say that a one-day worker strike in 270 cities will take place on Tuesday, making for its largest unified demonstration yet.

The Fight for 15, which is funded by the Service Employees International Union, represents 1.5 million workers mostly in the service sector. However, reports prove that several other occupations offer up low-paying wages that can lead to workers living in poverty. For example, a recent report from the Economic Policy Institute shows the average salary for child care workers is $10.31, which is 39.3% below the average $17 median hourly salary of other job fields.

Thus far, a few major cities including Los Angeles, Seattle, and San Francisco have agreed to gradually raise their minimum wage to $15 an hour, but there is still no state or federal law that mirrors the demanded hike.

In a statement, Huffington Post says the Fight for 15 described the issues of today’s minimum wage workers as a “voting bloc that can no longer be ignored.” With next year’s election approaching, organizers hope that Tuesday’s strike will show the political clout of low-wage workers as they protest outside of state capitol buildings around the country and outside the GOP presidential debate in Milwaukee.

With posters in hand and families standing side-by-side, check out a few moving photos from the strike that speaks volumes to our nation’s cry for a minimum wage hike.