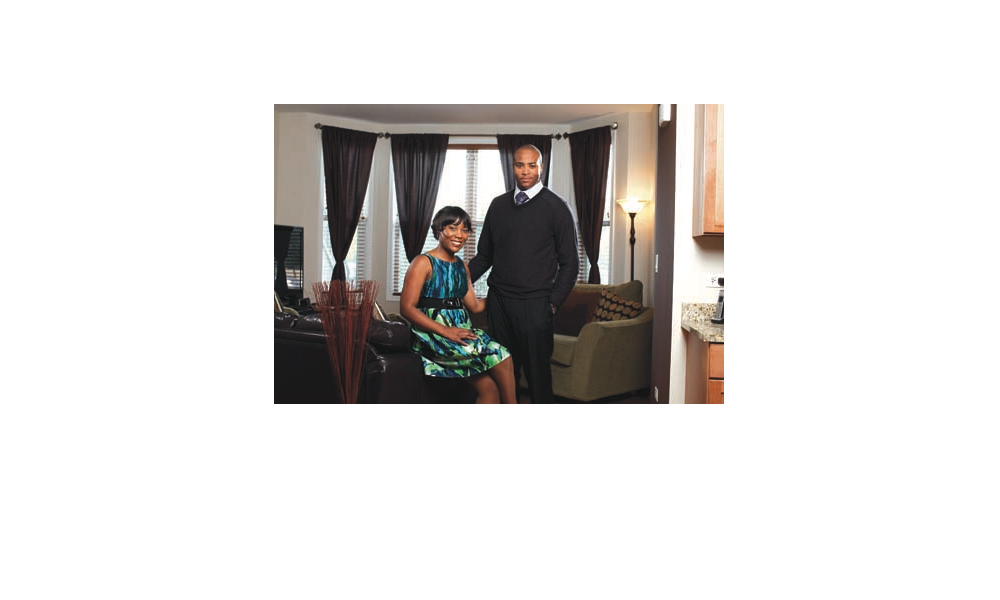 Twenty-somethings Thomas and Sharde Caffey of Chicago have only been married a little more than a year, and they can already see that their differing views about money lead to arguments and may stunt financial growth if they don’t get help fast. But 23-year-old Sharde and 22-year-old Thomas know that confronting their challenges early will help them set cohesive financial goals and handle their money as a couple. “I would like to pay off debt and the house,â€ says Thomas, a letter carrier for the U.S. Postal Service. “Maybe in the old days, having a house note was good debt. Today I feel there is no good debt,â€ explains Thomas about his zeal to pay down the $181,000 the couple owes on their one-bedroom condo.

Sharde feels as though the mortgage is always going to be there so they should focus on paying down short-term debts instead. “My plan would be to pay off my credit cards and move some of that money into savings in like a Roth IRA or something like that,â€ says Sharde, a part-time dental hygienist who doesn’t qualify to contribute to her employer’s retirement fund. “We had someone come out to talk to us about Roth IRAs, but Tommy didn’t like it. I liked it,â€ she explains.

While the couple figures out where to save their money and what debts to pay off first, new expenses are being added. Since their union, the couple has acquired two car notes in addition to the mortgage. At Thomas’ suggestion, the couple used part of a $5,000 tax credit refund to make one extra $1,400 mortgage payment and used the rest toward the purchase of a 2003 BMW Z4. They now pay $375 per month on the $15,000 still owed on the BMW. In addition, Sharde leased a 2011 Volkswagen Jetta for which they pay $298 per month. However, both admit that they don’t need two cars. Thomas says, “We could really make due with one. The Metro train is 15 minutes away from us and drops us both off not too far from work.â€

While Thomas isn’t in favor of the IRA at this time, he has been contributing 3% of his income to his employer’s 403(b) retirement account and has amassed $3,500 in the more than three years he has worked there.

The Caffeys realize communication is key to getting on the same financial page, even if it may not be pleasant at first. “My wife and I realize that talking about money can lead to arguments. However, avoiding arguments about money does not mean never discussing money or how it should be spent,â€ says Thomas. Sharde concedes: “This is a marriage, we are not roommates; we should be able to come to an agreement.â€

Get professional help. Sure, Thomas and Sharde have made some common money mistakes as twenty-somethings, but they have taken some positive stepsÂ  such as homeownership and beginning to invest for retirement. However, it is important that they enroll in financial empowerment courses. The Marquette Bank offers free personal finance classes (888-254-9500) as well as The Chicago Public Library (www.chipublib.org), which covers everythingÂ  from lowering your debt to investing and setting financial goals. They have a long time horizon and can really develop the skills and education needed to plan for a financially fruitful life.

Build savings. Their first priority should be to establish a cushion. be recommends they use the $2,000 contest winnings to start. When asked, they collectively felt they could comfortably save and invest up to $400 per month without dramatically altering their lifestyle. Freeman suggests they put away $150 per month in an emergency account and contribute $250 to additional investments beyond Thomas’ retirement account. Freeman estimates that the couple could have more than $25,000 saved in 5 years if they put the emergency fund in a cash account yielding 0.5% and $250 in an investment account that yields an average 8% a year. “They should begin this investment program right away and should look for ways to save and invest even more,â€ says Freeman. With the Postal Service making cutbacks they should be very mindful of the increasing need for emergency savings and for Sharde to get a full-time job, as well identifying multiple income streams.Â  Since they both admit they don’t need two cars, they should get rid of the leased vehicle and put that money in their emergency fund as well.

Pay off short-term debt. “Having the 0% interest is great, but it is only temporary,â€ points out Freeman. “They can achieve their goal of liquidating credit card debt by paying at least $350 per month on all of their cards. This would allow them to pay off all credit cards in 12 months,â€ he maps out.

Although Thomas says he wants to pay off his mortgage early, it is not an action Freeman recommends. Since it is highly unlikely that the young couple will stay in their one-bedroom condo for the next 15 years, he advises that the Caffeys “make their regular mortgage payment and invest any cash available after paying off their credit cards into building an investment portfolio.â€

Contribute to a Roth IRA. Because of their age and tax benefits they should open a Roth IRA. “They should consider the WisdomTree Large Cap Dividend Fund. This exchange-traded fund (ETF) is well diversified and sports a 2.67% dividend yield,â€ advises Freeman.