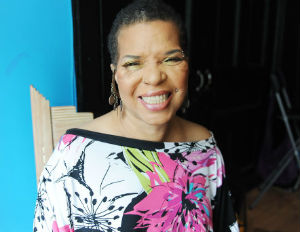 Commemorating the 40th anniversary of Ntozake Shange‘s groundbreaking choreopoem For Colored Girls is an introspective exhibition,Â i found god in myself, which is kicking off the fall season at The New York Public Library’s Schomburg Center for Research in Black Culture from Sept. 19 to January 2015. Â Her workÂ i found god in myself explores issues of femininity and gender, love and loss, empowerment and sisterhood.

Since its debut performance in California in 1974, Shange’s work has captivated, provoked, inspired and transformed audiences all over the world. Since, the work has remained a cornerstone of feminist, black, and LGBTQ-theory studies in colleges and theaters alike, both in the United States and abroad.

Shange is a past recipient of the The Women of Power Legacy Award, which recognizes outstanding impact, achievement and leadership by women in business, the arts, education, government and other influential industries. Black Enterprise recognized Shange in 2011 for her body of work as a playwright, poet, and self-proclaimed feminist who addressed issues relating to race and gender.

Turning to the choreopoem not simply as an engaging work of text or drama but as a well of social, political and deeply personal issues affecting the lives of women of color, the New York exhibition will feature 20 specially commissioned pieces in honor of each individual poem, additional non-commissioned artworks on display at satellite locations that address the work’s themes and archival material donated by Shange. The exhibition’s title is drawn from one of the last lines recited in the finale poem a laying on of hands. The title suggests that navigating through the complexities of what it means to be of color and female is only enlightened by an understanding, acceptance and appreciation of self. With self-empowerment comes the process of Â “…moving to the ends of their own rainbows.â€

By presenting visual works from both women and men, all races and various generations, i found god in myself explores the universality inherent in Shange’s powerful message to the world. A series of spoken word performances, screenings, panels, a community art project and a guided art crawl all accompany the exhibition. The exhibit is sponsored by AARP, Cuba Libre and Harlem Flo.

The exhibit is curated by cultural tastemaker Souleo. “This exhibition underscores the conversation Ms. Shange started, extending the legacy and impact of her work into the visual arts medium,â€ explains Souleo. “The issues surrounding love, sexuality, gender equality, racial identity, and, ultimately, self-love that she wrote forty years ago remain relevant today.â€

Supplementing the exhibition is archival material that traces the journey of Shange’s text from its very first performance at a California bar nearly 40 years ago to its critically acclaimed run on Broadway. In similar spirit,Â i found god in myself-related pieces will be found on display at two nearby satellite locations, The Sol Studio and La Maison d’Art, both in Harlem.

“It is not only gratifying, but joyous that the renowned Schomburg Library has taken upon itself the further enrichment ofÂ For Colored Girls through the visual arts,â€ says Shange.